The “Staffie” is sometimes mistaken for its cousin, the Pit Bull, and is very popular in the U.K., where ownership of the latter breed is controlled. It is a phenomenally strong, powerful dog for its size, seemingly comprised entirely of muscle. It is, however, considered a loving breed. 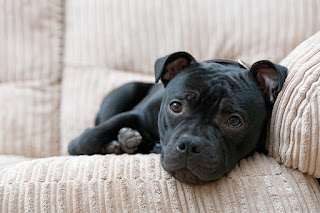 The Staffordshire Bull Terrier can be an imposing dog with its strong, muscular body, intense stare, and powerful stance. Many are interested in the breed because it looks like a tough dog but are surprised to learn that the Stafford is a sensitive and loving companion who enjoys playing more than being tough. He sees life as a joyful adventure and lives it to the fullest.
Fans love the Staffordshire Bull Terrier for his small to medium size, short, easy-care coat, and dynamic yet gentle personality. With his short, broad head and muscular body, he resembles the other bull breeds such as American Staffordshire Terriers and American Pit Bull Terriers, but he is a breed unto himself with distinct physical characteristics that set him apart, including size and ear shape.
Nicknamed the nanny dog, the Stafford is prized for his patience with and love of children, although it goes without saying that no dog should ever be left alone with young children or expected to double as a baby-sitter. He is not always so friendly toward dogs he doesn’t know however, a remnant of his origin as a fighting breed, which required him to be aggressive toward other dogs yet gentle with human handlers. 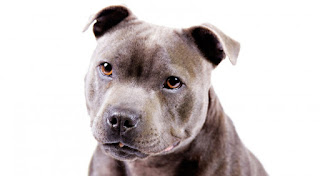 AKC group: Terriers
UKC group: Terrier
Average lifespan: 12 – 14 years
Average size:  24 to 38 pounds
Coat appearance: Smooth, short and close
Coloration: Red, fawn, white, black or blue, or any one of these colours with white; any shade of brindle; any shade of brindle with white
Hypoallergenic: No
Best Suited For: Families with children, active singles and seniors, houses with/without yards
Temperament: Loving, gentle, playful, amiable
Comparable Breeds: French Bulldog, Bulldog
History
Before the 19th century, blood sports such as bull baiting, bear baiting and cock fighting were common. At the cattle market, bulls were set upon by dogs purportedly as a way of tenderising the meat and providing entertainment for the spectators. Fights with bears and other animals were also organised as entertainment. 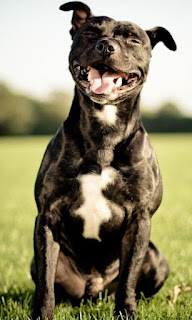 The early bull and terrier types were not bred to resemble the breeds of today, but rather for the characteristic known as gameness, with the pitting of dogs against bear or bull; testing the strength and skill of the dogs. Landrace working dogs crossbred with bulldogs provided the ancestral foundation stock for the Staffordshire Bull Terrier. These bloodsports were officially eliminated in 1835 as Britain began to introduce animal welfare laws. A dog fighting another dog was cheaper to organise and easier to conceal from the law. Dog fighting involved gambling and a way to continue to test the animal; dogs were released into a pit, and the last dog still fighting or surviving was recognised the winner.
The modern breed is one that has a temperament suitable as a companion dog. It is a dog worthy to show and was accepted by The Kennel Club as the Staffordshire Bull Terrier on 25 May 1935.The Staffordshire Bull Terrier Club was formed in June 1935. It is unusual for a breed to be recognised without a club in existence first, and even more unusual for there not to have been a breed standard in place. A standard was not drawn up until June 1935 at the Old Cross Guns, a Black Country pub in Cradley Heath. A group of 30 Stafford enthusiasts gathered there and devised the standard, as well as electing the club’s first secretary,   Joseph Dunn, a well-known figure connected with the breed.
Challenge certificates were awarded to the breed in 1938, and the first champions were Ch. Gentleman Jim (bred by Joseph Dunn) and Ch. Lady Eve (owned by Joseph Dunn), both taking titles in 1939. The breed was recognised in the U.S. by the American Kennel Club in 1975.
Personality 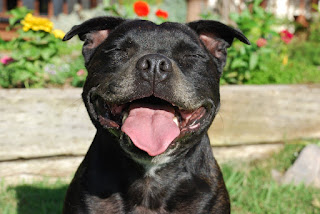 The Staffordshire Bull Terrier resembles other “tough” breeds like the American Staffordshire and Pit Bull Terrier, but these sturdy dogs look a lot tougher than they really are. The motto of many Stafford owners is, “He’s a lover, not a fighter.” Staffords would much rather romp around and play all day than grouse or fight or even stand around looking imposing. They have a zest for life and eat up new experiences with the zeal of a puppy.
They love to be with people and they don’t particularly care what the activity is: watching TV reading a book in the sun, waking, running, going for a ride in the car – the Stafford just wants to be with the people he loves. They also don’t like to make their own choices about what to do, and therefore don’t like being left alone, so Staffordshire Bull Terriers are best suited for active families where someone is always home with them. Despite their imposing look and tendency toward dog aggression, Staffords are actually very good with children. Toddlers are not recommended, but older kids who understand a dog’s boundaries will find that a Stafford will gladly accept the role of best friend, playmate, and evening pillow during TV time.
Health 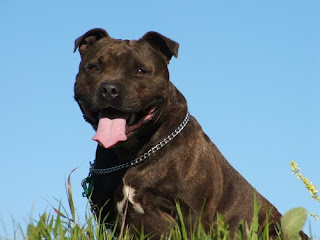 The average life span of the Staffordshire Bull Terrier is 12 to 14 years. Breed health concerns may include cataracts, congenital deafness, follicular dysplasia, pituitary-dependent hyperadrenocorticism, cystine urolithiasis, cataracts, elbow and hip dysplasia, heart problems, hypothyroidism, L-2-hydroxuglutaric aciduria, patellar luxation and skin allergies.
Care
In mild weather, the Stafford can live outdoors, but the cold can affect it. Moreover, as it craves human contact and company, it does better as an indoor pet. Minimal coat care is required to keep this breed prim and proper.
As it is an athletic breed, it requires a nice on-leash walk daily. It is fond of a run in a secure area or a good outdoor game. Be aware that most Staffords are not good swimmers.
Living Conditions
The Staffordshire Bull Terrier will do okay in an apartment if it is sufficiently exercised. It is very active indoors and will do okay with a small yard.
Training 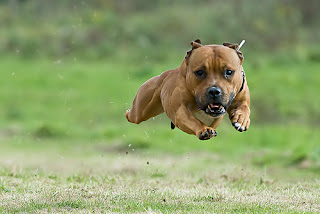 Strong training from an early age is important with the Staffordshire Bull Terrier. It should be properly socialized to other dogs and to people, and it should certainly learn the boundaries of acceptable behavior in a home setting. For example, too much growling, showing of teeth, and even playful biting should not be considered acceptable despite how often it seems your Staffordshire Bull Terrier is acting on instinct. The Staffordshire Bull Terrier is a dog that will get a lot of use out of chew toys, so be sure to find a few that it likes.
Activity Requirements
Though Staffords are happy to lounge around all day if you let them, these dogs need plenty of good running exercise every day to maintain their health and muscle tone. They enjoy walks, hikes, jogs or simple games of catch in the backyard. Enrolling them in organized activities like agility or flyball keeps their minds as sharp as their bodies.
Staffords are adaptable to just about any living situation be it apartment or estate, city or country. No matter what his living arrangements, a commitment should be made to properly exercise a Staffordshire Bull Terrier.
Grooming
The Stafford has a short, smooth coat and his grooming needs are modest. Brush the coat a couple of times a week to keep shedding to a minimum. Bathe him every three or four months or as needed if he’s dirty.
The rest is basic care. Trim the nails as needed, usually every week or two. Brush the teeth frequently with a vet-approved pet toothpaste for good overall health and fresh breath.
Children And Other Pets 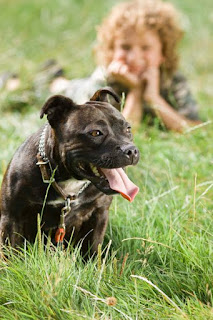 The Stafford is suitable for families with children, but despite his much vaunted patience and gentleness, he should always be supervised in the presence of toddlers or young children. He can be rambunctious and may accidentally knock small children down.
Always teach children how to approach and touch dogs, and always supervise any interactions between dogs and young children to prevent any mouthing, biting, or ear or tail pulling on the part of either party. Teach your child never to approach any dog while he’s sleeping or eating and not to try to take the dog’s food away. No dog should ever be left unsupervised with a child.
Some Staffords get along well with other dogs and cats when they’re raised with them. As adults, they may require more of an adjustment period before they welcome the company of another dog. To ensure the best relationship, choose a dog of the opposite sex. Make introductions in a neutral area away from your home.
Is the Staffordshire Bull Terrier the Right Breed for you?
Low Maintenance: Infrequent grooming is required to maintain upkeep. No trimming or stripping needed.
Minimal Shedding: Recommended for owners who do not want to deal with hair in their cars and homes.
Moderately Easy Training: The Staffordshire Bull Terrier is average when it comes to training. Results will come gradually. 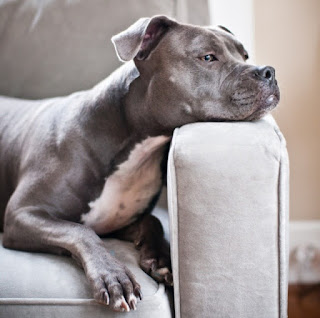 Fairly Active: It will need regular exercise to maintain its fitness. Trips to the dog park are a great idea.
Not Good for New Owners: This breed is best for those who have previous experience with dog ownership.
Good with Kids: This is a suitable breed for kids and is known to be playful, energetic, and affectionate around them.
Did You Know?
The Staffordshire Bull Terrier is generally considered one of the breeds known as a “pit bull” in the United States. Staffords are specifically exempted from national breed bans in their native Britain as well as Australia and New Zealand, but that’s not the case in the United States, where most laws aimed at “pit bulls” apply to them as well.