The American Water Spaniel was bred to be an all-around hunting dog. Specializing in waterfowl, he’s a skilled swimmer who will retrieve from small boats and has a water-resistant double coat. The dog breed has the high energy of a dog born to chase and retrieve game, but given enough exercise, he can also make an great family companion. 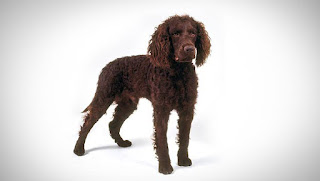 Known as the “little brown dog,” the curly-coated American Water Spaniel is the classic “big dog in a small package.” With a weight range of 25 to 45 pounds, he looks small and cute, but he’s a tough hunting dog who’s known for having a stubborn streak. Although he’s called a spaniel, the AWS is primarily a water retriever and has a fine reputation as a hunting dog among those in the know. His claim to fame is that he is the state dog of Wisconsin, where he was developed in the mid-19th century in the Wolf and Fox River Valley region.
Like any retriever, he’s tireless and needs daily exercise. A long walk will do, but you can also channel his energy into dog sports such as agility and flyball. He’ll love anything that involves getting wet and is an excellent choice for boaters, including canoers and kayakers, seeing as how he was developed to hunt from a boat. 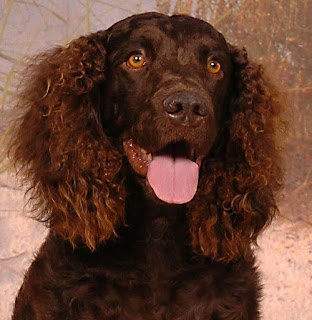 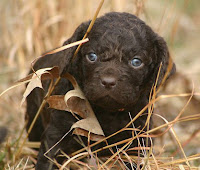 History
The history of the American Water Spaniel is somewhat of a mystery. The breed supposedly was “created” sometime in the late 1860s, when it accompanied settlers to remote but developing areas of the Midwestern United States.

They were bred as hunting dogs that would be capable of flushing and retrieving game in all conditions and terrain, including water. The early American Water Spaniel was primarily a duck and waterfowl retriever, but it actually became a unique combination between the true hunting spaniels and the hunting retrievers. The breed works equally well in water and on land. He has an excellent nose and is a sound swimmer. According to an American Kennel Club publication: “As a retriever the American Water Spaniel leaves little to be desired. He will watch the huntsman drop perhaps four or five birds, then work swiftly and merrily until every one is brought in. Rabbits, chickens, grouse, quail, pheasant, ducks – he handles all with unfailing dispatch and tender care. He swims like a seal, hence few wounded waterfowl escape him; his tail serves as a rudder to aid him, especially in turbulent water.” While the actual ancestors of the American Water Spaniel are unknown, it is suggested that they descend from crosses of the Irish Water Spaniel, the Old English Water Spaniel, the Curly-Coated Retriever, the Field Spaniel and the Poodle. The breed was well-established by the end of the 19th century and was particularly popular among sportsmen in Wisconsin, Michigan and Minnesota. The American Water Spaniel Club was founded in 1937. The breed was formally recognized by the American Kennel Club Registry in 1940, as a member of the Sporting Group.
The American Water Spaniel’s small size still endears him to hunters, especially those using canoes or other small boats to hunt waterfowl on inland lakes. Despite its rarity, this truly American breed also thrives as a family companion and makes an especially good watch dog. 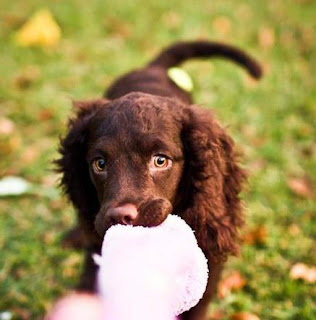 Friendly and eager to please, the American Water Spaniel is a good-natured dog that will keep your children entertained. It can play all day long, and at the end of the day, curl up on your lap for extra cuddles. It will partake in all kinds of activities, on land or in water. This breed loves to be around people and will want to follow you around no matter where you go.
The AWS is not a dog for people who spend a lot of time away from their home. This breed develops separation anxiety if let alone for alone periods of time, and will bark or howl. This dog needs plenty of companionship, exercise and play time to combat boredom.
A vocal breed, it’s an understatement to say that the American Water Spaniel likes to bark. When they are happy, need attention or left alone, the breed will bark… just to hear the sound of its own voice. Start training to avoid this behavior when your dog is a puppy.

Health
The lifespan of an AWS is between 10 and 15 years, and they do have a higher risk for developing some health conditions than do other dogs in their size range. Breed health concerns include diabetes; epilepsy; eye problems; heart problems; hip dysplasia; and hypothyroidism. They have a medium length curly coat which requires regular grooming.   They do well in both cold and in warm climates. Other breed health concerns include pattern baldness, cataracts, focal retinal dysplasia and adult-onset growth-hormone responsive dermatosis. 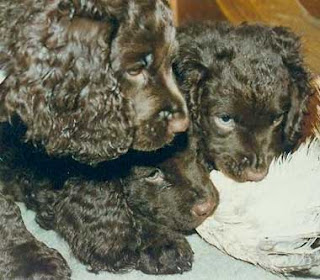 If he gets lots of exercise and playtime, the American Water Spaniel can do well in smaller living situations such as an apartment or condominium, but he’s a country dog at heart, and is happiest when he’s got plenty of open space to run off his natural energy.
Smart and trainable, the AWS responds best to short, motivational training sessions. Avoid heavy-handed techniques that use punishments for getting it wrong instead of rewards for getting it right — they could make him sulky or withdrawn. And train him yourself rather than sending him off to be tutored by a stranger. He’ll work much better for someone he knows and loves.
He may chew when his people aren’t home, so crate training is a must to keep your possessions safe and your AWS out of the doghouse.

Living Conditions
American Water Spaniels will do okay in an apartment as long as they get enough exercise. They are moderately active indoors and will do best with at least an average-sized yard. Like to roam in search of quarry. 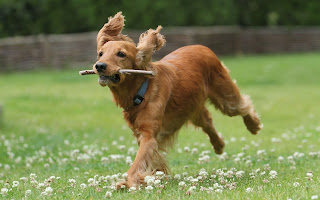 Intelligent and eager to please, the American Water Spaniel is easy to train. Harsh discipline can cause them to distrust people, so a confident, but gentle positive-reinforcement strategy works best.
There is no need to train the American Water Spaniel to fetch. They are born with the innate desire to chase, hunt, and retrieve, and can spend hours engaged in this activity. Once basic obedience training is completed, this breed should be enrolled in advanced training, or agility training to keep them challenged and mentally stimulated.
Unlike other breeds of spaniels, the American Water Spaniel is wary of strangers. They will bark to alert a stranger’s arrival, but can can grow to be distrusting of strangers, if not properly socialized. The earlier this breed is exposed to new people and new situations, the more easy-going they will be in adulthood.

Exercise Requirements
Because this is a hunting breed, the American Water Spaniel needs plenty of exercise. Running, hunting, swimming, hiking and bike rides – these are just a few of the ways you can tire your dog out. The AWS needs room to run, so you’ll need to have a fenced in yard. If you have a swimming pool, even better! And even though this is a smaller breed, the American Water Spaniel doesn’t do well in apartments. Because of the lack of space to run around, this dog may become destructive.
Great with children, the American Water Spaniels are patient and will put up with boisterous kids. However, the AWS will snap if startled, so children need to be taught to never sneak up on a sleeping dog or approach from the rear. 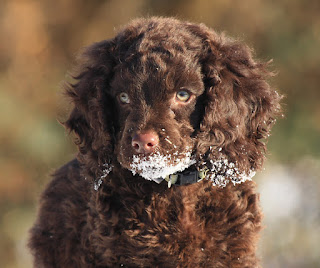 Expect to comb and brush this breed’s curly double coat two or three times a week.  Comb it first to prevent or remove mats and tangles. Do this every time your dog has been outside and picked up burrs or other debris. Use a slicker brush to remove dead hair. You may need to trim the coat every once in a while to give it a neat appearance. The AWS rarely needs a bath, but be sure to give him a thorough freshwater rinse after he has been in saltwater or a lake or pond with algae.
The rest is basic care. Trim the nails as needed, usually every couple of weeks. Clean the foot pads, and keep the ears clean and dry to prevent bacterial or yeast infections. More tips on grooming are available from the American Water Spaniel Club.

Children And Other Pets
The American Water Spaniel is gentle with children. Nonetheless, as with every breed, you should always teach children how to approach and touch dogs, and always supervise any interactions between dogs and young children to prevent any biting or ear or tail pulling on the part of either party. Teach your child never to approach any dog while he’s eating or sleeping or to try to take the dog’s food away. No dog, no matter how friendly, should ever be left unsupervised with a child.
Some American Water Spaniels are territorial and aggressive with strange dogs, but they generally get along well with family dogs and cats.

Is the American Water Spaniel the Right Breed for you? 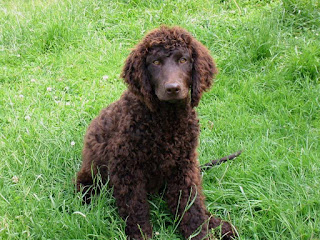 Moderate Maintenance: Regular grooming is required to keep its fur in good shape. Professional trimming or stripping needed.
Minimal Shedding: Recommended for owners who do not want to deal with hair in their cars and homes.
Moderately Easy Training: The American Water Spaniel is average when it comes to training. Results will come gradually.
Fairly Active: It will need regular exercise to maintain its fitness. Trips to the dog park are a great idea.
Not Good for New Owners: This breed is best for those who have previous experience with dog ownership.
Good with Kids: This is a suitable breed for kids and is known to be playful, energetic, and affectionate around them.

Did You Know?
The American Water Spaniel is the state dog of Wisconsin, where he was developed in the mid-19th century in the Wolf and Fox River Valley region.