Always an adventurer, the Bouvier des Flandres has rugged good looks and is generally ready and raring to do almost anything. His rough and tumble looks are a mere reflection of his incredible personality. With an inherent work ethic, the Bouvier des Flandres will herd livestock or children. It is essential that he has a job to do or he can become unhappy, bored and destructive.

Meaning “cow herd from Flanders,” the Bouvier des Flandres was bred in Belgium to assist farmers, cattle merchants and butchers with herding. Nicknamed “cow dog,” “dirty beard” and “cattle driver,” the breed still enjoys being a working dog. Often used for police work, as a farm hand, as a watchdog, for military work, as an assistant to the blind and more, the Bouvier des Flandres does best on land with a lot of exercise and training.
Like most dogs with a working background, the intelligent Bouvier is an independent thinker, so he must be taught from an early age that you are his leader. It’s also important to assign him daily “work,” such as helping to pull garden tools around the yard or participating in dog sports, like agility, carting, herding, and tracking. Bouviers are active and athletic, so they enjoy jogging, hiking, and long walks  twice a day. If you’re the outdoorsy type, look into search-and-rescue training for you and your Bouvier. 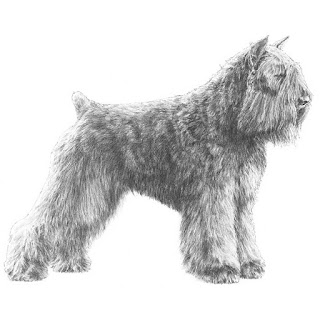 This became a working dog able to perform tirelessly, herding and guarding cattle and even pulling cargo carts, thanks to its strength and temperament, and to withstand the local weather conditions due to its thick coat.

Historically, the ear cropping and tail docking could have been done for practical reasons, avoiding accidental amputations in the course of work, or to indicate the dog was working stock and not a pet subject to taxation.
Up until the early 20th century, the breed was not completely defined, with three variants: Paret, Moerman or Roeselare, and Briard. Conflict between the proponents of these three variants held the breed’s development back. In 1912 and 1913, several local kennel clubs recognized standards for Bouviers; however they usually had different standards for the Roeselare and other variants.
World War I nearly caused the breed to disappear, due to the devastation that came over its region of origin and the fact that the dogs were used for military purposes. Indeed, Nic, a male trained as a trench dog who served during the war and was a perennial winner at dog shows after the war, is considered to be the founder of the early Bouvier des Flandres breed.
A unified Bouvier des Flandres standard was created in 1936 by a joint French-Belgian committee. However, World War II again endangered the breed’s existence. Due to these setbacks, progress was slowed, and it was not until 1965 that the Fédération Cynologique Internationale (FCI) breed standard, as agreed to by several minor kennel clubs, was adopted.
Personality 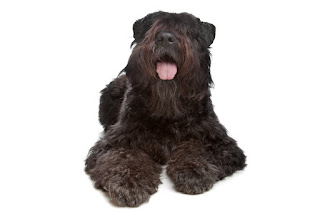 Serious and thoughtful, The Bouvier Des Flanders is a dignified family companion who is built for athletics, but would much rather nap indoors by the fireplace. Rowdy and rambunctious as puppies, as adults Bouviers mellow into dignified and sober housemates.   They love to be with people and are happiest when completely surrounded by their “flock” of humans. Their protective nature makes them excellent watchdogs, and they are patient with children.
The Bouvier has a strong personality: He needs an owner who can kindly and consistently show leadership, otherwise, he’s likely to fill the void. This doesn’t mean you should take a drill sergeant approach, but you must act the confident leader and consistently, albeit gently, enforce guidelines.
Health Problems
Prone to hip dysplasia, eye problems such as cataracts. The Bouvier has a very high pain threshold. They can take a lot of contact with the cattle’s legs without feeling it. This does not make them a veterinarian’s favorite patient, as they cannot tell where the dog is hurting by manipulating the legs and/or other body parts. Tends to pass gas.
Care 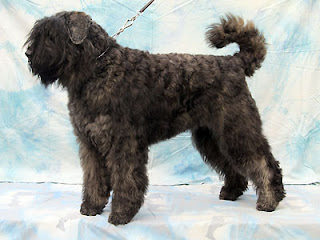 Although the Bouvier des Flandres breed is capable of living outside, they are at their best when given access to both house and field. They love human companionship and should be given a great deal of regular exercise. They enjoy playing for hours, which is a good exercise choice. Jogging or walking for long hours also keeps them healthy. Herding is one of their favorite games. Occasional combing and trimming of their coat is essential to keep them at their best. They can be great house dogs.
You’ll need to take special care if you’re raising a Bouvier puppy. Like other large breeds, the Bouvier grows very rapidly between the age of four and seven months, making him susceptible to bone disorders. Don’t let your Bouvier puppy run and play on very hard surfaces such as pavement or pull a cart until he’s full grown and his joints are fully formed. Normal play on grass is fine, as is puppy agility play, with its one-inch jumps.
Living Conditions
The Bouvier des Flandres will do okay in an apartment if it is sufficiently exercised. It is relatively inactive indoors and will do best with at least a large yard.
Training
Bouviers are extremely intelligent dogs however; they require a strong authority figure. It is essential that a Bouvier des Flandres thoroughly understands his place within the household. Given the chance, he will overtake the home and attempt to rule the roost. 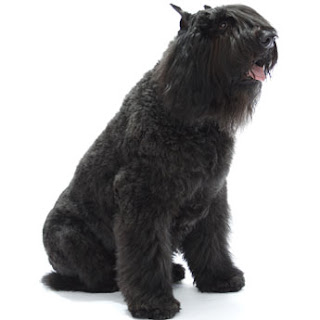 Many Bouviers excel in herding, agility and obedience trials. Their desire to work and do their jobs well make them well-suited for many other things including tracking, search and rescue as well as police work. Training should be started early. It should be done with patience, kindness and assertiveness. Plenty of delectable treats should be used as rewards for doing well.
Activity Requirements
This gentle giant requires a lot of vigorous activity throughout the day. As Bouviers move from adolescence to adulthood, they will become a bit lethargic and will often need to be told when it’s time to exercise, but keeping their activity levels high is very important to their health and mental well being, even if they need to be coaxed into it.
This breed, despite their large size, is well-suited for an apartment or condominium, so long as they are exercised daily. If Bouvier Des Flandres aren’t exercised enough they can become destructive, and an apartment would be mincemeat in the mouth of a bored Bouvier. A house with a large fenced-in yard for running is great, but as the Bouvier gets older, he may appreciate long walks more so than romping in the grass.
Grooming
The Bouvier has a double coat, with a tousled look. His undercoat, which offers warmth and water-resistance, is soft, dense, and topped by rough hairs that protect the dog from inclement weather. A mustache, beard, and eyebrows give the Bouvier his characteristic gruff appearance.
If you adore the way Bouviers look in the show ring, think twice about getting the breed: This well-coiffed look takes hours to achieve. At home, the Bouvier is your typical shaggy dog. His coat doesn’t shed much, but it does develop mats and tangles if not thoroughly brushed once a week. A good brushing takes about an hour; ask your breeder or a groomer to show you how to line brush the coat, so you don’t miss any mats. You’ll need a stiff bristle or pin brush, as well as blunt-tipped scissors. If you don’t plan to show him, it’s okay to trim the Bouvier’s beard and coat for easier upkeep. The rest is routine care: bath your Bouvier when he’s dirty, as well as clean his ears and trim his nails on a regular basis.
Children And Other Pets 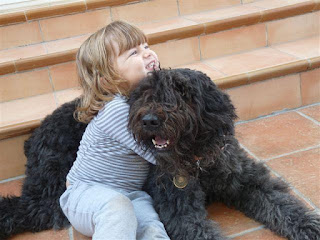 The Bouvier is a wonderful family dog who is devoted and protective with his family, including children. He may wish to herd his children with nudges and barks.
To best teach him to get along with kids, he should be raised with them or, if he doesn’t live with them, he should be exposed to children as he grows up.
As with every breed, you should always teach children how to approach and touch dogs, and always supervise any interactions between dogs and young children to prevent any biting or ear or tail pulling on the part of either party. Teach your child never to approach any dog while he’s eating or sleeping or to try to take the dog’s food away. No dog, no matter how friendly, should ever be left unsupervised with a child.
The Bouvier should be raised with other dogs and animals for the best chance at getting along with them when he grows up. If he is socialized and trained properly, he usually just ignores other animals in his household. Buy hid instinct to herd and chase is strong, supervision is always a good idea.
Is this breed right for you?
The Bouvier des Flandres is known as one of the most loyal of dog breeds on the planet. A friendly disposition, it can sometimes be shy and needs to be both trained and socialized young with both people and non-canine pets. A lover of children, it makes a great family dog, although it is a large breed and needs to learn how to behave around younger kids as a puppy. This dog most definitely needs a strong leader to show who is boss and avoid any behavioral problems. Generally inactive indoors, the Bouvier des Flandres does OK with apartment living, although it does best with a large yard or plenty of land in which to roam free. Requiring daily brushing and bathing, this breed requires a lot of grooming; however, due to low shedding, it is an awesome addition for allergy sufferers.
Did You Know?
The Bouvier des Flandres has several European nicknames: Vuilbaard (dirty beard), Koehond (cow dog), and Toucheur de Boeuf (cattle driver).
Notable Bouviers des Flandres
A dream day in the life
The Bouvier des Flandres is a lover of people and family and will enjoy waking up around those it enjoys most. Going to work outside, it’ll happily follow the commandments of its owner. Once its day’s work has finished, it’ll guard the house and romp around with the kids. After a nice run around the block, the Bouvier des Flandres will nestle in with the rest of the brood for a good night’s rest..

Everything about your Cesky Terrier