Choosing to add a furry friend to your growing household is a long-term commitment, and picking a breed that fits your lifestyle is the key to a happy home. With over 160 American Kennel Club-recognized breeds, that decision can seem overwhelming. We’re here to help you meet the breed that’s right for you. If you’re looking for a devoted guard dog that gets along well with children and cats, learn everything you need to know about the Bullmastiff. 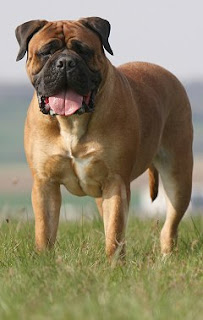 As the name suggests, the Bullmastiff is 60 percent Mastiff and 40 percent Bulldog. Bred in England to guard estates from poachers, the idea behind the mix was to create a dog that was larger than the Bulldog, yet a bit faster and more fierce than the Mastiff. Once its services were no longer needed, it was turned into a hunter’s companion due to its light complexion. Now, Bullmastiffs are known for their police work, assistance in the military and as excellent family guard dogs. 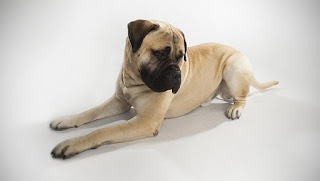 Comparable Breeds: Boxer, Mastiff
History
The Bullmastiff is a relatively modern breed that was developed in the mid-19th century, probably around 1860, by English gamekeepers who needed a large, quiet, fearless dog with the speed to track down poachers and the strength to hold them.
They probably experimented with a number of breeds in an attempt to create the perfect dog for their needs, but the one that paid off was the Mastiff/Bulldog cross. The Mastiff was large but not aggressive enough, while the Bulldog, brave and tenacious, lacked the size needed to knock down and hold a man. 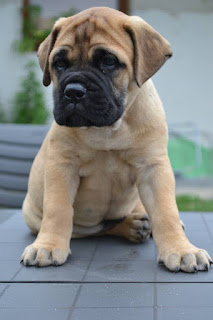 The popular cross became known as the Gamekeeper’s Night-Dog and worked and lived alongside the gamekeeper and his family. The dogs were bred for utility and temperament with little thought put into looks, the exception being a preference for a dark brindle coat, which provided camouflage at night.
Poaching eventually declined, and the Bullmastiff took on a new role as a guard dog. As a result of the Mastiff influence, the fawn coat with a black mask became more common as well.
It wasn’t until the early 20th century that the Bullmastiff began to be bred as a distinct type rather than as a crossbreed.
In 1924, England’s Kennel Club recognized the breed. The American Kennel Club followed suit in 1933. The first Bullmastiff registered by the AKC was Fascination of Felons Fear in 1934.
Today the Bullmastiff ranks 40th among the 157 breeds and varieties registered by the AKC, a testament to his qualities as a companion.
Personality
Bullmastiffs were developed as overseers of livestock and flocks. They took their responsibility seriously and developed a reputation for fearlessness in the face of predators. Bullmastiffs were also invaluable to gameskeepers, patrolling the grounds and stopping poachers from hunting the stock. They were trained not to hurt people and would stalk the poachers and keep them subdued until backup arrived to arrest the trespasser.
Today Bullmastiffs maintain their imposing figure and watchful eye, but make a generally docile family pet. It takes a lot to provoke a Bullmastiff and despite what their appearance may suggest, they get along just fine with children. They make great farm dogs, happily keeping an eye on livestock and accompanying farmers as they do their chores.
Health Problems

Bullmastiffs are generally a healthy breed of dog but some health issues may occur. These include hip and elbow dysplasia , bloat or gastric torsion,  Hypothyroidism (thyroid hormone deficiency causes lack of energy, obesity, and infertility), skin problems (this breed’s sensitive skin is prone to irritation, sores, and rashes), eye problems, cancer, tumors, and cardiac disease.
Care
The bullmastiff is a big dog and needs daily exercise to stay in shape. Its needs are moderate, however, and can be met with walks on leash and short romps. It does not do well in hot, humid weather and generally should be kept as an indoor dog. It needs a soft bed and plenty of room to stretch out. It drools; some snore. Coat care is minimal.
Living Conditions 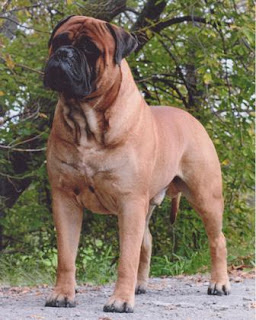 Bullmastiffs will do okay in an apartment if they are sufficiently exercised. They are relatively inactive indoors and a small yard will do. They cannot tolerate extremes of temperatures.
Trainability
Bullmastiffs are not for the soft of heart. They are stubborn and willful and need a great deal of consistency and confidence from a leader or they will quickly take over the house. Training should be done with calm-assertiveness, lots of positive reinforcement and plenty of treats. They will test boundaries and employ manipulation to get their own way.
This breed is not for the first time dog owner, either. They need constant reinforcement of leadership roles and their socialization with people and animals should be ongoing. In short, living with a Bullmastiff is a commitment to ongoing work. They are like perpetual teenagers, testing boundaries and ignoring the rules, just to see if they can get away with it. Consistency is the key ingredient to training a Bullmastiff.
Exercise Requirements
Bullmastiffs are not active dogs – in fact, this breed just likes to take it easy and are happy lazing around the house and doing as little as possible. Be sure to get your dog outside so it stays active. Your Bullmastiff needs enough daily exercise to keep it in shape. Take your dog out for daily walks and play in a large fenced backyard. Moderate, regular exercise and monitoring its meals will keep your dog from becoming overweight.
Grooming
The short smooth coat of a Bullmastiff is essentially wash and wear. A quick daily or weekly brushing is all it takes to get the dead hairs out and reduce shedding.
Bathe your Bullmastiff as you desire or only when he gets dirty. With the gentle dog shampoos available now, you can bathe a Bullmastiff weekly if you want without harming his coat.
Drool. There’s no way around it: Bullmastiffs drool. Get in the habit of carrying around a hand towel so you can wipe his mouth frequently.
The rest is basic care. Keep the nails short, and brush the teeth regularly for overall good health and fresh breath.
Children And Other Pets
Bullmastiffs are patient with and protective of children, but because they’re so large, they can accidentally knock over or step on a toddler. If you have children, take their age and size into consideration when deciding whether to get a Bullmastiff.
Always teach children how to approach and touch dogs, and always supervise any interactions between dogs and young children to prevent any ear biting or tail pulling on the part of either party.
Teach your child to never approach any dog while he’s sleeping or eating or try to take away the dog’s food. No dog, no matter how good-natured, should ever be left unsupervised with a child.
The Bullmastiff may well be aggressive toward dogs he doesn’t know. He does best with dogs of the opposite sex, especially if he’s been raised with them.
He can get along with cats if he’s raised with them, although some Bullmastiffs can’t resist the urge to chase them. A cat who stands up for itself will fare better than one who runs away.
Is this breed right for you? 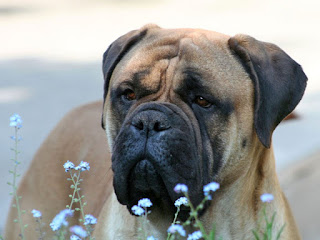 Active yet calm, the Bullmastiff is great for apartment or home life, but it will do best with a small yard and daily walks to avoid behavioral problems. It gets along well with cats, adores children and makes for a wonderful companion dog. Affectionate, the Bullmastiff was taught not to bite, but it is extremely fearless and will attack any threat that comes into range.   Because of this, it is best that it is socialized young and trained by a firm yet kind owner.   Sensitive, it is easily emotionally scarred and will not do well in a kennel or by being yelled at. Although it does not bark often, it is very loud when it does. A big drooler, snorer and likely to slobber, this is a kind yet messy pup. Not shedding very often, the Bullmastiff is easy to groom.
Did You Know?
Although loving and sweet natured, the Bullmastiff is a large guard dog with a mind of his own. He needs an assertive, experienced owner. Bullmastiffs can be willful and are not likely to back down once aroused.

Famous Bullmastiffs
Brutus – Bob Dylan’s dog in the 1980s
Butkus – Sylvester Stallone’s dog
Rocky – Roloff family dog (Little People Big World)
Swagger – the live mascot of the Cleveland Browns
Mudge – Henry and Mudge (children’s books)
A dream day in the life
There is no doubt that the Bullmastiff would prefer to spend its day surrounded by its family. At the heel of its favorite companion, this dog will be its master’s shadow whenever it is not snoozing on the couch. After a walk, it’ll ensure the home is safe by checking the home’s perimeter inside and out. A lover, the Bullmastiff will be happy with a good rubdown as it falls asleep.
Total
0
Shares
Share 0
Tweet 0
Pin it 0
Share 0

Everything about your Kuvasz