Affectionately called the “yard-long dog” in his native Wales, the Cardigan Welsh Corgi is active and good-natured — and he loves to be busy. Cardigans make excellent watchdogs, but they can become nuisance barkers if they’re not properly trained. 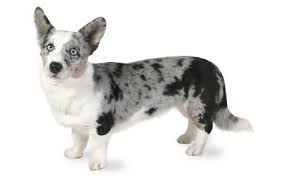 Overview
The Cardigan is a low-set dog, approximately 1.8 times longer than it is tall, with moderately heavy bone. It is small but powerful — capable of the agility, speed and endurance necessary to drive cattle for extended periods. Its small size allowed it to duck under the cattle’s hooves should they kick at it. Its gait is free, smooth, effortless and ground-covering. Its double coat consists of a soft thick undercoat and slightly harsh outer coat of medium length. Its expression is alert, gentle and watchful, yet friendly.

Fun-loving and high-spirited, yet easygoing, the Cardigan is a devoted and amusing companion. This is a hardy breed, capable of a day dodging kicks, so it is agile and tireless.   At home it is well-mannered but inclined to bark. It tends to be reserved with strangers and can be scrappy with other dogs.

Other Quick Facts
History
The Cardigan Welsh Corgi is believed to be the older of the two Corgi breeds. Although no one knows for sure, his ancestors may have arrived in Wales alongside ancient Celts who migrated from central Europe. The dog that we know today hails from hilly Cardiganshire, which once teemed with farms and valleys that were perfect for raising cattle. His predecessors drove cattle to market, nipping at their heels to get the cattle to move, and pivoting out of the way if the livestock kicked back. 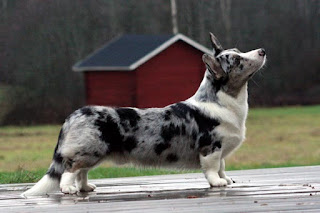 Industrialization eventually put an end to the Corgi’s usefulness on the farm, and people began crossing the dogs with other herding breeds, including Collies and early Pomeranians, who were much larger than today’s standard Pom. The Collie cross may have thrown the blue merle coloration into the Cardigan’s gene pool.
For a time, it looked as if the Cardigan would go the way of the dinosaurs because he was less popular than his cousin, the Pembroke Welsh Corgi. At one point, the two were even considered the same breed, but the Kennel Club separated them in 1934, giving the Cardigan more of a chance to survive on his own. The Cardigan Welsh Corgi Association wrote a standard for the breed, and thanks to a 1931 importation of some Corgis by Mrs. Robert Bole of Boston, Massachusetts, the dogs became known in the United States. In 1935, the American Kennel Club recognized the breed. The descendants of Mrs. Bole’s dogs did well in the show ring, including Ch. Swansea Jon, CD, who took Best of Breed at the Westminster Kennel Club Dog Show three years running. Today, the Cardigan is still less popular than the Pembroke — the Cardi ranks 84th among the breeds registered by the AKC — but he’s definitely in no danger of disappearing.
Personality 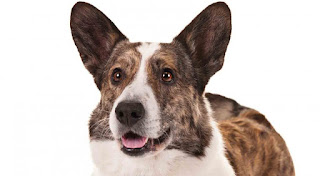 The Cardigan Welsh Corgi my be small, but they pack a lot of dog into a little body. Originally used to herd cattle and hunt rodents in Cardiganshire, Wales; Corgiw were strong working dogs that took their jobs seriously. They would nip the heels of the cattle, and their small bodies enabled them to avoid being kicked. Today, the Corgi is still used on farms and ranches, but is also an energetic family companion. They are good with other pets, make reliable watchdogs, and are trustworthy around children. Corgis have a mind of their own but still have a desire to please people. They pack a large personality, which varies from clownish and attention seeking, to thoughtful and introspective.
Health
The Cardigan Welsh Corgi, which has an average lifespan of 12 to 14 years, may suffer from degenerative myelopathy and canine hip dysplasia (CHD). This breed may also be prone to progressive retinal atrophy (PRA) and urinary stones. To identify some of these conditions early, a veterinarian may recommend hip, eye, and DNA tests for the dog.
Care
The Cardigan Welsh Corgi requires a lot of exercise for its small size. Its exercise needs are best met with a good herding session, but a vigorous play session or a moderate walk is also sufficient. It can easily live outdoors in cool or temperate weather, but it serves as an excellent house-dog and is at its best when allowed to spend time in both the yard and home. Its coat requires brushing once every week to remove dead hair.
Training 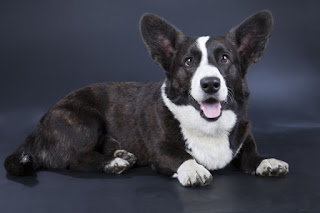 Training for the Cardigan Welsh Corgi can be both a pleasure but also a test of your leadership. These dogs are generally obedient so long as you lay the fundamentals down – that is to say, you establish that you are the leader of your household and that your dog’s place is below that of any humans who reside in it. The dog should be able to pick up on this, and when it does, it can make a highly trainable and obedient companion.
Living Conditions
Corgis will do fine in an apartment if they are sufficiently exercised. With enough exercise they can be calm indoors, but will be very active if they are lacking. Will do okay without a yard so long as they are taken for daily walks.
Exercise Requirements
If you don’t like getting a lot of exercise, this probably isn’t the breed for you, as the Cardigan Welsh Corgi needs daily exercise that is fairly rigorous, and is capable of handling plenty of exercise on a habitual basis.
Grooming
The Cardigan has a thick, medium-length double coat that sheds a lot, but it also repels dirt, lacks an odor, and is easy to maintain. To remove dead hair and distribute your Cardigan’s natural skin oils, groom his coat weekly using a shedding blade, slicker brush or fine pin brush. Baths are rarely needed. Cardigans also go through heavier seasonal sheds twice a year, so brush more often during that time to keep flying fur under control.
The rest is routine care: Trim his nails every few weeks — you can also trim the hair on his feet for a neater look — and brush his teeth frequently for good overall health and fresh breath.
Children And Other Pets 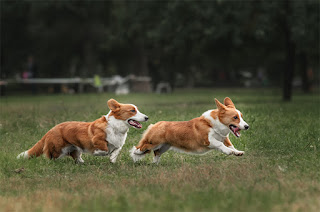 Cardigans love children, but their herding instincts can motivate them to nip at a youngster’s feet or ankles. They can learn quickly, however, that this behavior is not permitted.
As with every breed, you should always teach children how to approach and touch dogs, and always supervise any interactions between dogs and young children to prevent any biting or ear or tail pulling on the part of either party. Teach your child never to approach any dog while he’s eating or sleeping or to try to take the dog’s food away. No dog, no matter how friendly, should ever be left unsupervised with a child. 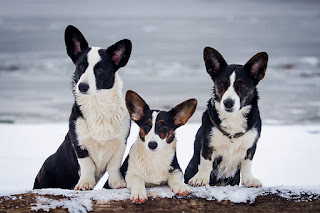 Cardigans are usually friendly toward other pets in the household, so long as they have been socialized with them. They can be aggressive toward dogs that aren’t part of their family, but they enjoy having a second or third dog in the family to play with, especially another Corgi.
Did You Know?
You can tell a Cardigan apart from a Pembroke Corgi if you remember that the Cardi has a long tail, like the sleeves of a cardigan sweater, while the Pembroke has a “broke” tail.
Total
0
Shares
Share 0
Tweet 0
Pin it 0
Share 0