Created to retrieve game from land or water, the Curly-Coated Retriever dog breed was popular with English gamekeepers, hunters, and poachers alike. Today he competes in such dog sports as field trials, agility, obedience, and flyball and has been successful as a therapy dog, drug detection dog, and search and rescue dog. When he’s not out working or competing, he’s happy to lie beside his favorite person, enjoying a nice back scratch. 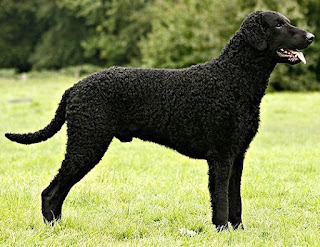 The Curly-Coated Retriever has been around since the late 18th century, probably created by crossing now-extinct Old English Water Dogs, Irish Water Spaniels and small Newfoundlands, with, yes, some Poodle added later. The result was a black or liver-colored retriever with tight curls on his body and a zest for water retrieving. The Curly-Coat is a fun and interesting dog, no doubt about it.
The Curly may be uncommon, but he has a dedicated band of followers who prize him for his intelligence, trainability, multiple abilities, sense of humor and, of course, that unusual appearance. He’s not the breed for everyone, but if you can appreciate his constantly thinking brain, you will find him to be a loving, talented and entertaining companion.
A typical retriever, he enjoys activity, although he requires somewhat less exercise than, say, a Lab or a Flat Coat. Channel his energy into dog sports such as agility, flyball and flying disc games, or teach him to pull you or your kid on skates or a skateboard. He’ll also do well in competitive obedience. The Curly is slow to mature, however, so it can take time for training to stick. Be patient, and use positive reinforcement techniques such as play, praise and food rewards. When the motivation is there, the Curly learns quickly and easily.
Like most dogs, Curly-Coats become bored when left to their own devices. They can easily become noisy or destructive if they don’t have other dogs to keep them company and don’t receive much attention from their people. But when the Curly lives with a family who is willing to spend plenty of time training and exercising him, he thrives. 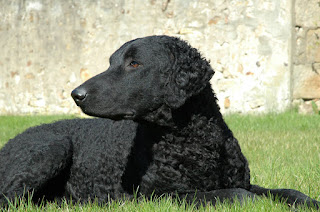 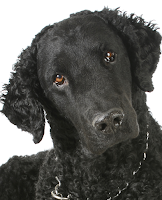 Breed standards
AKC Group: Sporting
UKC Group: Gun Dogs
Lifespan:  8 to 12 years
Average size:  between 60 to 70 pounds
Color: Black and Brown
Coat: Dense, Short, and Water-Repellent
Hypoallergenic Breed: No
Shedding: Moderate
Grooming Needs: Low Maintenance
Comparable Breeds: English Springer Spaniel, Labrador Retriever
History
The exact history of the Curly-Coated Retriever is not known. Popular conjecture suggests that the Curly-Coated Retriever descends from the now-extinct Old English Water Spaniel and from the Retrieving Setter. Other contributors to the breed are thought to include the small St. John’s Newfoundland, the Poodle, the Labrador Retriever, the Pointer and/or the Irish Water Spaniel.
This popular gun dog was first exhibited in 1860 at Birmingham. In 1889, some Curly’s were exported to New Zealand, where they have since been used for retrieving duck and quail. In Australia, Curly-Coated Retrievers are also highly prized for use on water fowl in the swamps and lagoons of the Murray River. They are excellent all-around hunting dogs, with an especially tender mouth and unparalleled water skills. 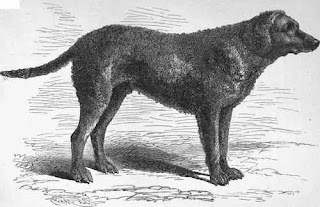 The first breed club was established in England in 1896. The breed was introduced to America as early as 1907, with the first American Kennel Club registration of a Curly-Coated Retriever being made in 1924. They are members of the AKC’s Sporting Group. The Curly-Coated Retriever Club of America was formed in 1979 and is the breed parent club in this country. In the early part of the twentieth century, the Curly’s popularity waned while the Flat-Coated Retriever’s popularity rose. Today, the Curly-Coated Retriever retains its world-wide presence as a determined, durable hunter and a gentle family companion, although the breed is still uncommon.
Personality
The Curly-Coat is full of retriever drive and determination. He’ll work ’til the job is done. In the field or at home, he’s alert and self-confident. He has an even temper but is more reserved with strangers than other retrievers. Early socialization — exposure to many different people, sights, sounds and experiences — helps prevent timidity. That said, don’t confuse his independence and poise with shyness or a lack of willingness to please. Curly-Coated Retrievers take longer to mature than other breeds, so be prepared to live with a full-grown puppy for several years.
Curlies have a mind of their own and need a confident owner who won’t allow them to run the show. The Curly-Coated Retriever responds well to training, although not always as quickly as other dogs. That doesn’t mean he’s dumb. He simply gets bored easily. Keep him interested with a variety of training exercises. It’s not unusual for a Curly to ignore his trainer when an exercise or activity becomes repetitive.
Health 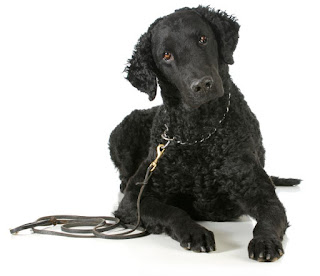 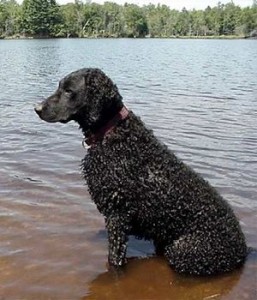 Curly-Coated Retrievers grow to become large dogs so it is essential that you start training when they are puppies. It is also important that you keep in mind that because they are such great Retrievers, they tend to mouthy and chew things up as pups. This unwanted behavior must be nipped in the bud at an early age.  The Curly is highly trainable and responds well to repetitive training sessions along with positive reinforcement. His willingness to please makes the Curly-Coated Retriever the perfect candidate for AKC Sanctioned Obedience Trials.
Owners who plan to use their Curly-Coated Retrievers for hunting purposes should acclimate the pup to water as soon as possible. This doesn’t mean that a ten week old puppy should go into icy water in the freezing cold. It’s best to buy a plastic wading pool and fill it with water on a mild day. More than likely, the pup will find his way in and have a grand, old time. A retrieving dummy will make his first experience in the water a good one.
Activity Requirements
Like other retriever breeds, the Curly Coated version needs lots of vigorous exercise every single day. They are an active person’s dog – couch potatoes should steer clear of this breed. They love running, swimming, hiking, playing ball and catching frisbees. They can be competitive in agility courses, but they are not as obedient as their Golden Retriever counterparts, so they often do not excel in this arena, but they enjoy the activity and eat up the attention.
Curlies need as much mental stimulation as they do physical stimulation and should always be provided with plenty of interesting activities throughout the day, especially when left alone. Inactivity and boredom leads to destructiveness and hyperactivity that is hard to curb.
Grooming 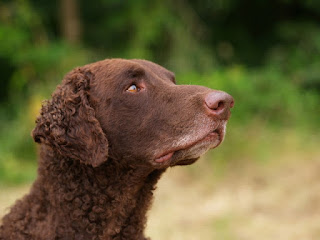 The Curly coat of small, tight, crisp curls has little odor and is easy to care for. Comb or brush it out before bathing with an undercoat rake or a slicker brush and comb. Don’t worry that brushing will take the curl out of the coat.
Depending on how dirty a Curly gets, a bath is necessary only every month or two. Most Curly coats dry quickly, sometimes in as little as ten minutes. Don’t blow dry a Curly unless you want him to look like a chia pet.
The only other grooming is a little trimming to neaten any straggly hairs, a bushy tail, or excessive feathering on the backs of the legs and behind the ears. Some Curlies have tufts of fur between their toes, giving the feet the appearance of fluffy houseslippers. These tufts are usually trimmed for the show ring, but can be left alone if you like the look.
Curlies don’t shed much, but they do shed. If your Curly spends time in the house, you will find hair on the furniture or floor. The coat usually sheds a small amount year-round, with a heavier shed twice a year.
The rest is basic care. Trim the nails as needed, usually every few weeks. Keep the ears clean and dry to prevent ear infections. Brush the teeth frequently for good overall health and fresh breath.
Children And Other Pets
The Curly-Coated Retriever is a great companion for older children who can stand up to his size and energy level, but he may be overwhelming for younger children who are easily knocked down in play. Any time your Curly interacts with children, lay down some ground rules for dog and child. No ear pulling, tail pulling or biting allowed! For the safety of both, never leave small children unsupervised with any dog.
Curly-Coated Retrievers generally do very well with other dogs and animals but socialization is still important in regard to animal interactions.
Is the Curly-Coated Retriever the Right Breed for you? 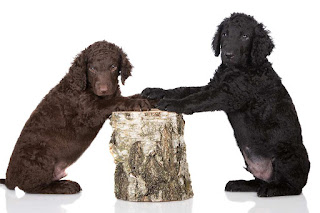 Low Maintenance: Infrequent grooming is required to maintain upkeep. No trimming or stripping needed.
Moderate Shedding: Routine brushing will help. Be prepared to vacuum often!
Moderately Easy Training: The Curly-Coated Retriever is average when it comes to training. Results will come gradually.
Fairly Active: It will need regular exercise to maintain its fitness. Trips to the dog park are a great idea.
Good for New Owners: This breed is well suited for those who have little experience with dog ownership.
Good with Kids: This is a suitable breed for kids and is known to be playful, energetic, and affectionate around them.
Did You Know?
You might mistake the Curly-Coated Retriever for a Labradoodle, but he’s a distinct breed, created in the 18th century by crossing now-extinct Old English Water Dogs, Irish Water Spaniels and small Newfoundlands. And yes, there’s some Poodle in the mix, too.
Total
0
Shares
Share 0
Tweet 0
Pin it 0
Share 0