One of the biggest dogs recognized by the American Kennel Club, the massive Mastiff loves being around people and is known to bond closely with his ‘family.’ A combination of grandeur and good nature as well as courage and docility, he was bred in England and used as a watchdog for more than two thousand years. The breed’s short coat can be fawn, apricot or brindle. 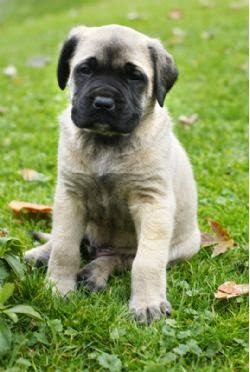 The Mastiff is one of the most ancient types of dog breeds. His ancestor, the molossus, was known 5,000 years ago. Then, he was a ferocious war dog, very different from the benevolent behemoth that he is today. He makes a fine companion for anyone who can accommodate his great size and doesn’t mind a little drool slung here and there.
The Mastiff is the classic gentle giant, loving but sometimes stubborn. His size alone is enough to deter troublemakers. At heart, he is a peaceful dog, but he is always protective of his family and will step in if danger threatens.
​For the uninitiated, a face-to-face encounter with these black-masked giants can be startling. Standing as high as 30 inches at the shoulder and outweighing many a full-grown man, Mastiffs make an immediate and lasting impression. The rectangular body is deep and thickly muscled, covered by a short double coat of fawn, apricot, or brindle-stripe. The head is massive, and a wrinkled forehead accentuates an alert, kindly expression.

Overview
Among the largest and most-impressive breeds in the world, Mastiffs have other breeds beat in the size department. Other breeds may be taller and bigger, but in sheer mass, the Mastiff is as big as it gets. Very protective by nature, this breed has guard-dog instincts to protect, although its massive build is often intimidating enough to deter even the boldest trespasser. Easygoing and laid-back, Mastiffs make good family pets and love social atmospheres. 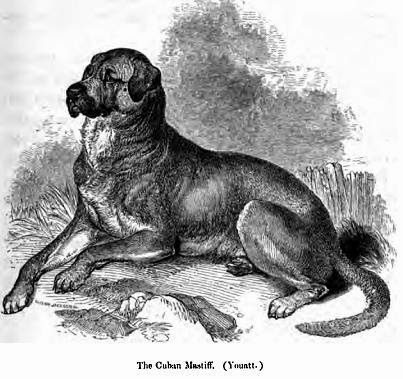 History
The ancestors of the Mastiff probably originated in the mountains of Central Asia several thousand years ago. The name Mastiff probably comes from the Latin, either “massivus,” meaning huge, or “mastinus,” meaning house dog. The early Mastiffs were called molossers and were used for hunting, guarding and fighting. From Tibet or northern India they accompanied traders and nomads throughout the world, making their way to the Middle East, the Mediterranean, China and Russia. Ancient Egyptians depicted massive dogs on the walls of the pyramids, and in Greek mythology the three-headed canine guardian of the underworld is a mastiff-type dog. Greeks, Romans and other peoples all used mastiffs in battle.
In medieval times, Mastiffs patrolled estates at night, ever on the alert for poachers or other intruders. Through the 16th century they were still used as war dogs in Europe. One famous line of English Mastiffs descends from a female Mastiff belonging to Sir Piers Legh of Lyme Hall, who was injured at the battle of Agincourt in France in 1415. She guarded him until he could be removed from the field and cared for and was later returned to his estate in England. The Lyme Hall line of Mastiffs lasted into the 20th century.
Mastiffs as we know them today began to be developed in England in 1835. That was the same year that dogfighting was outlawed, making it a turning point in the breed’s temperament. If Mastiffs were to survive, they needed to have a more peaceful nature. The breed continued developing through the end of the 19th century, but World War I, with its food shortages, almost led to the demise of the Mastiff. The same thing happened during World War II. Fortunately, the breed was rebuilt and is moderately popular today.
The American Kennel Club recognized the Mastiff in 1885. The Mastiff ranks 28th in AKC registrations, up from 39th in 2000, showing a steady increase in popularity.

UKC group: Guardian dog
Average lifespan: 8 – 12 years
Average size: 120 – 230 pounds
Coat appearance: Short, sleek, close
Coloration: Silver fawn, dark fawn, brindle and apricot
Hypoallergenic: No
Other identifiers: Massive and powerful body frame and head. Black face mask and wrinkled forehead.
Possible alterations: None
Comparable Breeds: Bullmastiff, Great Dane
What are they like?
​It’s been a long time since Mastiffs have been employed as warriors or hunters. Modern Mastiffs are steady, sweet-tempered, patient family companions and guardians who take best to gentle training. Eternally loyal, Mastiffs are protective of their loved ones, and their natural wariness of strangers makes it essential that they be trained and socialized in early puppyhood. They are droolers and hearty eaters, and acquiring a dog of such colossal size and strength is a weighty commitment. 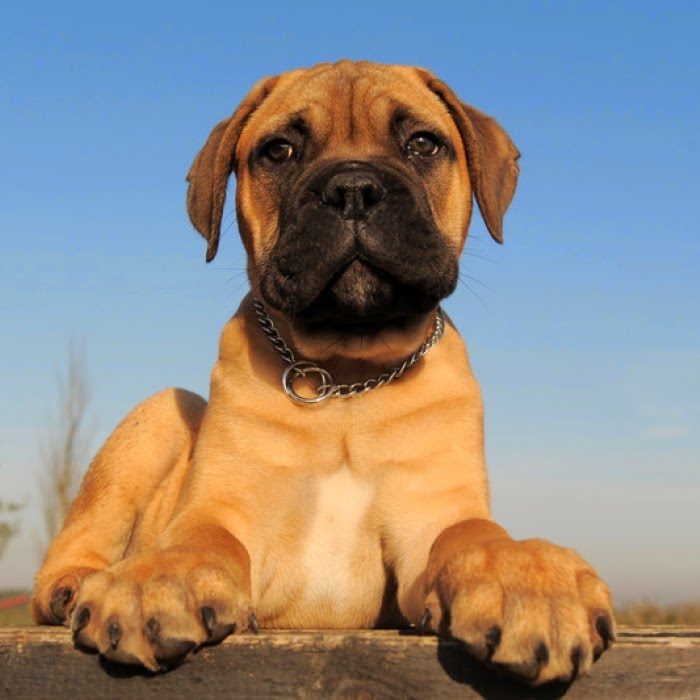 Temperament
The Mastiff is a very massive, powerful, muscular dog. Dominance levels vary, even within the same litter, but it is often called a gentle giant. A born guard dog, the Mastiff rarely barks, but it is in its nature to defend its territory and family, and is more a silent guard rather than a barker. When an intruder is caught the dog is more likely to hold them at bay, either by trapping them in a corner or lying on top of them rather than an all-out attack. You do not need to train your Mastiff to guard. No matter how friendly it is, if it senses danger it will naturally guard on its own unless the owners are there to tell it otherwise. Self-confident and watchful, these dogs are patient and considered excellent with children. Intelligent, calm, even-tempered and docile, this breed is very large and heavy. They respond well to firm, but gentle, patient training. They love to please and need a lot of human leadership. Socialize them well to prevent them from becoming aloof with strangers. Owners need to be firm, calm, consistent, confident with an air of natural authority to communicate to the Mastiff that dominance is unwanted. If socialized with proper leadership it will get along well with other dogs. The Mastiff tends to drool, wheeze and snore loudly. It can be somewhat difficult to train. The objective in training this dog is to achieve pack leader status. It is a natural instinct for a dog to have an order in its pack. When we humans live with dogs, we become their pack. The entire pack cooperates under a single leader. Lines are clearly defined and rules are set. Because a dog communicates his displeasure with growling and eventually biting, all other humans MUST be higher up in the order than the dog. The humans must be the ones making the decisions, not the dogs. That is the only way your relationship with your dog can be a complete success.
Health Problems
Beware of hip dysplasia. As these dogs are prone to bloat, feed two or three small meals a day, instead of one large one. Also prone to CHD, gastric torsion, ectropion, PPM, vaginal hyperplasia, elbow dysplasia and PRA. Occasionally seen is cardiomyopathy.
Is this breed right for you?
With big dogs come big responsibilities. Mastiff owners must be financially prepared to take on the equally massive bills required to raise this extra-large breed. Neat freaks may want to steer clear of this breed as their huge paws track in dirt by the mounds, and they are known to slobber excessively. Due to its large size, you can bet this breed has an appetite, meaning more yard cleanup than for an average dog. If your life motto is “bigger is better,” you can’t go wrong with a Mastiff. Loving, sweet and instinctively protective, this breed makes a great family pet and guard dog. Just be very aware of this huge breed around small children. Room to roam is ideal for a gentle giant like the Mastiff; however, this pup tends to adapt well to a smaller household with proper exercise. 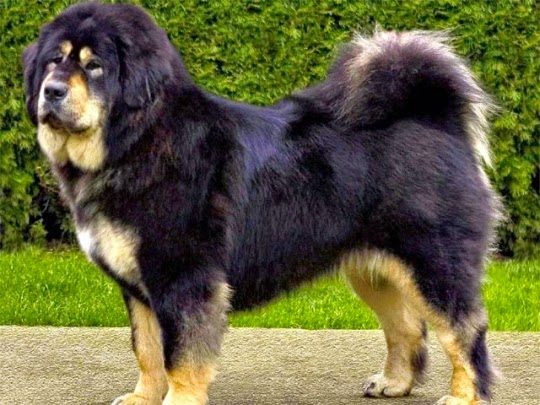 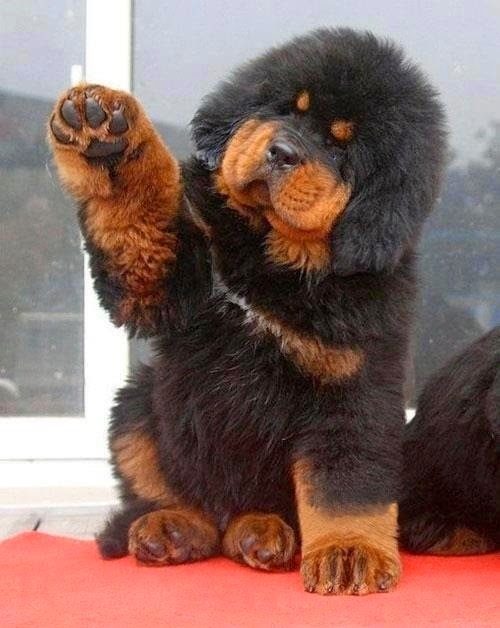 Grooming
The Mastiff’s short coat is easy to care for. Brush it with a rubber curry brush at least weekly -daily, if you want. The brush removes dead hairs that would otherwise end up on your floor, furniture and clothing.
Mastiffs shed moderately to heavily. Some dogs shed heavily only during spring and fall shedding seasons, while others consistently shed throughout the year. The more you brush, the less hair you’ll have flying around.
To keep your Mastiff’s facial wrinkles clean and infection-free, wipe them out as needed using a damp cloth or a baby wipe. Then dry them thoroughly. Moisture left behind can create the perfect environment for bacterial growth.
Bathe your Mastiff only when he’s dirty. If you’re lucky, that won’t be very often. But if you want to bathe him every week, you can. Just use a gentle shampoo made for dogs.
The rest is basic care. Trim his nails as needed, usually every week or two, and brush his teeth with a vet-approved pet toothpaste for good overall health and fresh breath.
Children and other pets
Mastiffs love children. That said, they are large, active dogs and can accidentally knock a toddler down with a swipe of the tail. They’re best suited to homes with older children. Bear in mind as well that Mastiffs are not ponies, and children cannot ride them. Your Mastiff can be injured if children try to ride him.
Always teach children how to approach and touch dogs, and always supervise any interactions between dogs and young children to prevent any biting or ear or tail pulling on the part of either party. Teach your child never to approach any dog while he’s sleeping or eating or to try to take the dog’s food away. No dog should ever be left unsupervised with a child.
In general, Mastiffs will tolerate other dogs and cats, especially if they’ve been raised with them. If you’re adding a second adult Mastiff to your family, you may want to consider getting one of the opposite sex to avoid any arguments over who’s top dog. 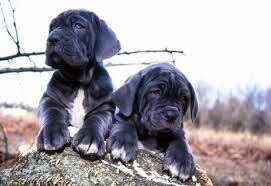 Did You Know?
The Mastiff is the classic gentle giant, loving but sometimes stubborn. His size alone is enough to deter troublemakers. At heart, he is a peaceful dog, but he is always protective of his family and will step in if danger threatens.
A dream day in the life
With a gentle heart and a calm disposition, Mastiffs are simply happy just being with their human families. A very loyal breed, their main purpose is to protect their caretakers, but if given the chance, Mastiffs will take a short break from standing guard for cuddles and snuggles. A moderately athletic breed, the large pooch will gladly join you on daily walks and playtime at the park.