Beneath that shaggy coat and gentle disposition, the Old English Sheepdog is an independent thinker with his own agenda and a powerful herding instinct. He loves people and is an excellent watchdog, but proper care of his coat requires a serious time commitment. 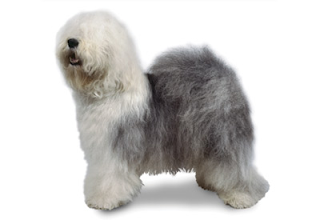 The exact origin of the Old English Sheepdog is unknown; however, there are traces of its heritage in the western counties of England. Bred by farmers as fast and intelligent sheep and cattle herders to take animals to the market, their tales were docked for identification purposes. When sheering the sheep, farmers would often do the same to the Old English Sheepdog for blankets and warm clothing. Known also for herding deer due to its dense coat and cold-weather durability, the breed makes a great working and guard dog.
In reality, the OES — nicknamed “Bobtail” because of his docked tail — is an easygoing, fun-loving, intelligent dog. He’s a member of the American Kennel Club Herding Group. He’s certainly a large dog at 60 to 100 pounds, but his profuse coat of blue-gray and white makes him appear even larger. Known for his wonderful temperament, he’s powerful, sturdy, and hardworking. 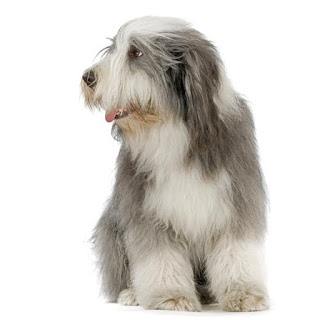 Breed standards
AKC group: Herding Group
UKC group: Herding
Average lifespan: 10 – 12 years
Average size: 60 – 100 pounds
Coat appearance: Double coat with hard and coarse hair; textured outercoat; and waterproof, soft undercoat
Coloration: Gray, grizzle or blue with or without white markings
Hypoallergenic: No
Other identifiers: Strong, square body with deep chest; black nose; flat ears close to the head; brown or blue eyes; short tail
Possible alterations: Can have one brown- and one blue-colored eye; born tailless
Comparable Breeds: Bearded Collie, South Russian Ovtcharka
History
The Old English Sheepdog comes from the very old pastoral type dogs of England, but no records were kept of the dogs, and everything about the earliest types is guesswork. A small drop-eared dog seen in a 1771 painting by Gainsborough is believed by some to represent the early type of the Old English Sheepdog. In the early 19th century a bobtailed drovers dog, called the Smithfield or Cotswold Cor, was noticed in the southwestern counties of England and may have been an ancestor. Most fanciers agree that the Bearded Collie was among the original stock used in developing today’s breed. Some speculate that the Russian Owtchar was among the breed’s ancestors.
The Old English Sheepdog was at first called the “Shepherd’s Dog” and was exhibited for the first time at a show in Birmingham, England, in 1873. There were only three entries, and the judge felt the quality of the dogs was so poor that he offered only a second placing.   From that beginning, the breed became a popular show dog, and, although the shape of dog itself has changed very little over the years, elaborate grooming including backcombing and powdering the fur were recorded as early as 1907. The breed was exported to the United States in the 1880s, and by the turn of the 20th century, five of the ten wealthiest American families bred and showed the Old English Sheepdog. The breed continues to be a popular show dog today.
Personality 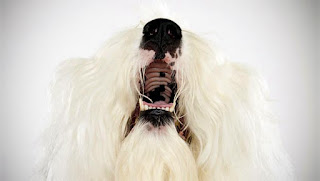 The Old English Sheepdog is a playful, affectionate clown who delights in frolicking with his family and neighborhood children. In fact, adolescence in the OES often extends to about age three, and an adult OES will retain his playful demeanor well into his golden years.
An intelligent breed, the OES is a quick learner, always looking for something interesting and fun to do. He’s capable of performing numerous tasks, including herding, agility, obedience, and search and rescue.
This breed requires significant physical and mental exercise. He doesn’t enjoy being left alone for long periods of time and much prefers — in fact needs — to be in the company of his family.
A properly bred OES is good-natured and kind, and this is what makes him an excellent children’s companion and a super family dog. He’s sometimes called a nanny, a term of endearment that arises from stories surrounding the role he sometimes takes on within his family.
However, the OES is not known for being an assertive watchdog. He may bark when strangers come to his home — or he may not. Some OESs are highly protective, while others aren’t.
Health 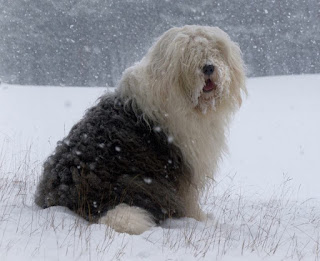 The Old English Sheepdog, which has an average lifespan of 10 to 12 years, is prone to minor health conditions like deafness, cataract, gastric torsion, otitis externa, progressive retinal atrophy (PRA), cerebellar ataxia, retinal detachment and hypothyroidism, or major health issues like canine hip dysplasia (CHD). To identify some of these issues a veterinarian may run hearing, hip, thyroid, and eye exams on the dog.
Care
The Old English Sheepdog can live outside in temperate or cool climates, but it should have access to indoor quarters or the house, as it seeks constant companionship. A moderate or long walk or an energetic romp can fulfill its daily exercise requirements. And the Old English Sheepdog’s coat needs combing or brushing on alternate days to prevent it from getting matted.
Living Conditions
The Old English Sheepdog will do okay in an apartment if it is sufficiently exercised. These dogs are fairly active indoors and will do best with at least an average-sized yard.
Training
As with many assertive and sometimes strong-willed breeds, the training will be crucial. Old English Sheepdogs come from a clear hierarchy both in dog packs and in the farming structure in western England, which means they need to feel like they have a place within your home’s own hierarchy. Good training, setting boundaries, and even giving your Old English Sheepdog a job to perform are all good ways of establishing this hierarchy. 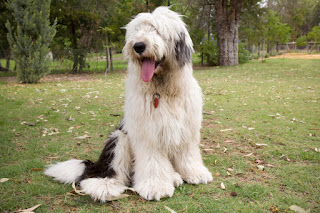 A particularly weak-willed owner can sometimes find the Old English Sheepdog to be a handful, especially as the dog gets older and becomes more set in its ways.
Activity Requirements
Apartment dwellers may be drawn to this breed because they have a reputation for being well-behaved indoors but Old English Sheepdogs are not city dwellers and should not be kept in apartments or condos. They are country dogs, who do best in the suburbs or on a farm where they can herd livestock. At least one hour of vigorous activity per day is required for Sheepdogs to maintain health, happiness and an even temperament.
Sheepdogs make excellent walking, jogging, biking and hiking companions and should be included in these activities. Their heavy coats can make them prone to overheating, so most owners keep their long coats cropped short.
Grooming
The glory of the Old English Sheepdog is his coat. The most difficult part of caring for an Old English is also his coat. Expect to spend at least a half hour to an hour a week keeping it groomed. Along with time devoted to coat care, be prepared for dog hair around the house and on your clothes, as well as dirt, mud and debris tracked in on the dog’s furry feet.
One of the advantages of buying an Old English from a breeder is the opportunity to learn how to groom him from a master. Even if your dog’s breeder does not live nearby, she is only as far away as an email or phone call if you need advice on how to groom the dog.
Get a puppy used to grooming from day one. Comb and brush him gently but thoroughly so that he learns to welcome the attention. If you neglect the coat, it will get so tangled, dirty and smelly that it will have to be shaved. Grooming tools that will come in handy are a dematting comb, a shedding rake and a wide-toothed comb. Use shears to trim the hair between his paw pads and to trim the hair around his rear end to keep it free of fecal matter and urine stains. 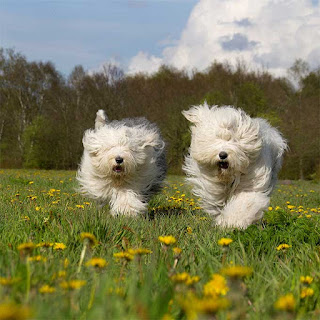 The Old English also needs the basic care that all dogs get. Trim his nails as needed, usually every week or two, and brush his teeth with a vet-approved pet toothpaste for good overall health and fresh breath.
Children And Other Pets
The well-bred and well-socialized Old English Sheepdog is a trustworthy children’s companion. Some say he will supervise and herd young children, keeping them in a particular area. Others say the OES acts as a means of support to the toddler learning to walk.
Unfortunately, there are some exceptions to the Old English Sheepdog’s role as a loving nanny, due to poor breeding that has resulted in ill-tempered and neurotic dogs. Buy only from a reputable breeder and ask to meet the puppy’s parents. And it is extremely important to note that children should never be left unsupervised with any dog, regardless of breed or temperament.
The good-natured OES is friendly with other dogs and pets, provided he is properly socialized and trained.
Is this breed right for you?
Friendly and active, the Old English Sheepdog is a lover of family and children. A gentle and loyal breed, it requires training to avoid herding humans. A natural-born worker, it does best when it has a job to do. Since it is active indoors, the breed needs a large yard to roam in and may not be satisfied with apartment living. Requiring a sufficient amount of exercise and an owner with strong leadership, the Old English Sheepdog can easily become distracted and troublesome. In need of brushing and regular grooming, the dog is not considered to be a large shedder.
Did You Know?
There is no upper limit for the height of the Old English Sheepdog. Females are typically 21 inches and up, males 22 inches and up. That’s because sheep varied in size, so the dogs used to herd them also varied in size.
Famous Old English Sheepdogs
A dream day in the life 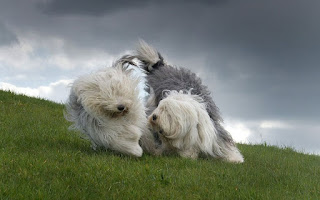 The Old English Sheepdog loves to be around its family members. Waking up surrounded by children and other people, it will happily greet each with a smile. Running outside for a bit, it’ll guard the home as its number-one priority. Coming inside for a bit of play, this breed will be ready and waiting for its daily run. After its daily brushing, the Old English Sheepdog will engage in a game of fetch before snoozing at the foot of its favorite owner.
Total
0
Shares
Share 0
Tweet 0
Pin it 0
Share 0