This is a large, shaggy scenthound who nearly disappeared after hunting otters became illegal in Britain, but fans have repurposed him as a companion. He’s entertaining to live with but can be difficult to keep clean. The Otterhound is laid-back, but that doesn’t mean he’s a couch potato. Expect to exercise him thoroughly every day. 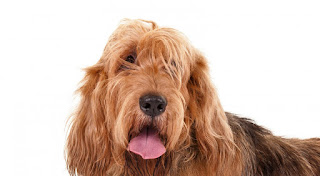 Thought to come from French ancestors, the Otterhound is a large breed that’s close to extinction. Used in packs by fishermen to help catch and retrieve otters, the dog has a good scent trail and webbed feet to help retrieve fish. With sea otters on the endangered list, we’re seeing less of this breed. Extremely affectionate and devoted to his family, this breed is a large and loving animal. 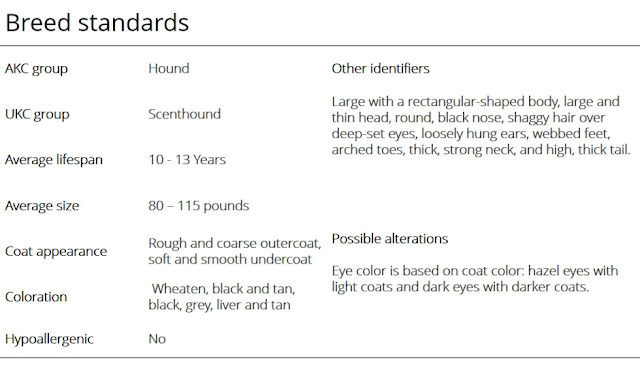 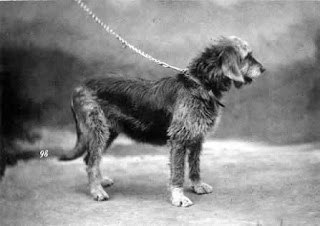 Although there is not much to be said about the genetic makeup of the breed, it was a prized otter hunter in England as early as the 13th century. In 1212, King John kept the earliest documented Otterhound packs. This dog was used for searching for otters, which were exhausting the fish in local streams. The dog trailed the prey to its hideout and bayed after locating it. After the hunters arrived, they would take away the Otterhound and use small terriers to kill the otter.
Although otter hunting was not a popular sport – as it lacked the formality of foxhunting and took place in wet weather conditions – the breed rose in popularity during the later part of the 19th century, when more than 20 packs hunted in England. However, this sport started losing its prominence after World War II.
The first Otterhound was introduced to the United States at the turn of the 20th century; soon thereafter, the American Kennel Club would formally recognize the breed.
Unfortunately, this ancient English breed is slowly becoming extinct. Otterhound fanciers are often not in favor of breeding the dog for dog shows and thus it has not been very popular as a pet or show dog.
Personality
The Otterhound is an amiable fellow, with plenty of affection for every member of the family. He loves children, though he can play a little rough due to his large size. He is devoted to his family, but not overly so.
He’s likely to extend happy greetings when you come home at the end of the day, but don’t expect him to follow you from room to room. He’s too independent for that.
The Otterhound’s characteristic independence makes training challenging. You have to convince him that he wants to do what you’re asking. This is entirely possible, as long as you are patient and skilled.
The good-natured Otterhound is not a top candidate for a watchdog. He’ll sound a loud warning bark to intruders, but that’s about it.
As with every dog, the Otterhound needs early socialization — exposure to many different people, sights, sounds, and experiences — when they’re young. Socialization helps ensure that your Otterhound puppy grows up to be a well-rounded dog. 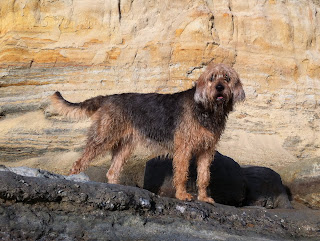 Enrolling him in a puppy kindergarten class is a great start. Inviting visitors over regularly, and taking him to busy parks, stores that allow dogs, and on leisurely strolls to meet neighbors will also help him polish his social skills.
Health Problems
Like most large, rapid growing breeds, Otterhounds occasionally suffer from joint problems such as hip and elbow dysplasia. They are also known to suffer from ear infections due to the long, droopy shape of their ears. Otterhounds can also sometimes suffer from epilepsy and this is considered to be a hereditary ailment.
Care
The Otterhound is not a breed that can brag of its tidiness, as food often gets trapped in its mouth a face, or mud in its hairy feet. Therefore, the dog should be brushed and combed at least once a week.
More over, the Otterhound requires a daily exercise regimen. It can sleep outdoors in cool and temperate climates if given proper shelter.
Living Conditions
The Otterhound is not recommended for apartment life. They are relatively inactive indoors if they have sufficient exercise. They do best with at least a large, well-fenced yard. It can sleep outdoors in temperate or cool climates if given a good shelter.
Training 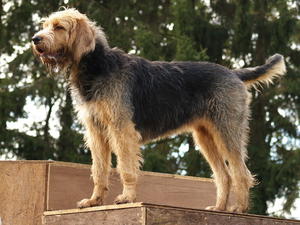 Otterhounds were never bred to be kept as companions and are therefore not the easiest of dogs to train. Training them requires a firm hand and a great deal of patience. They are also a good-natured breed and do not respond well to harsh training methods. A firm but gentle approach always works best with this breed. It is also important that an Otterhound’s owner display consistent leadership as this dog can turn willful and stubborn if faced with a meek or passive owner.
Exercise Requirements
Otterhounds have a great deal of stamina and require strenuous and daily exercise. They make excellent jogging and hiking partners and can keep up a steady trot for the better part of the day. When not exercised sufficiently they can sometimes turn destructive.
Grooming
The Otterhound has a rough double coat that sheds water and has a crisp texture. It’s easy to care for with weekly brushing. The coat can be two to six inches long, and some coats are oilier than others. An Otterhound who has a longer, oilier coat gets dirty more quickly than one with a shorter, less oily coat, so the need for bathing varies. Some Otterhounds need a bath monthly, while others can get by with a bath only once a year. However frequently you bathe him, plan to clean the Otterhound’s beard after every meal to prevent odor. You will also spend a lot of time cleaning his feet, which have a tendency to attract mud and debris. 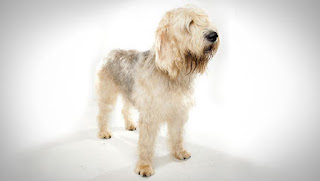 With some Otterhounds, you may need to strip the coat once or twice a year to maintain its crisp texture. Stripping is the process of pulling out dead hair by hand. Ask your dog’s breeder if it is necessary and how to do it. Clipping the coat will make it soft, which is okay as long as you don’t show your dog and don’t mind the loss of the traditional texture. The Otterhound Club of America offers good grooming tips on its website.
Anytime the Otterhound gets wet, whether from a bath, a swim, or a face wash, be sure you dry him completely to avoid a mildew-like effect, especially under the chin or any other place he has skin folds. In addition, if the Otterhound doesn’t get dry right down to the skin, he can develop painful, itchy, tender spots.
The rest is basic care. Trim his nails every week or two and keep his ears clean and dry. Good dental hygiene is also important. Brush the teeth frequently with a vet-approved pet toothpaste for good overall health and fresh breath.
Children And Other Pets
Otterhounds are boisterous, fun-loving dogs, but because of their size and tendency toward clumsiness, you should supervise them when they are with small children. They love children and wouldn’t hurt them intentionally, but their size and exuberance might cause them to knock a small child to the ground. The Otterhound is probably better suited to a family with older children, ages 10 and up. 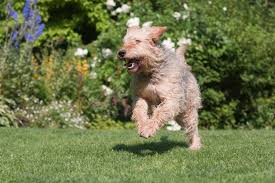 If properly trained and socialized, the Otterhound gets along well with other dogs. Use caution when introducing him to small pets, however. The Otterhound’s hunting instinct is strong, and he’s likely to chase animals he perceives as prey.
Is this breed right for you?
A loving and devoted companion, the Otterhound is good with children of all ages. Affectionate and smart, this breed gets along well with all members of the family, including cats. Known to have a knack for hunting, he may chase small animals and fish if given the opportunity. A terrific companion and great for outdoor life and camping, he’ll enjoy any type of activity that involves swimming. Although inactive indoors, this breed is not recommended for apartment living due to his large size and need for regular exercise.
Did You Know?
The water-loving Otterhound has large webbed feet to facilitate his ability to swim. Combined with his rough coat, they give him a look all his own.
A dream day in the life of an Otterhound 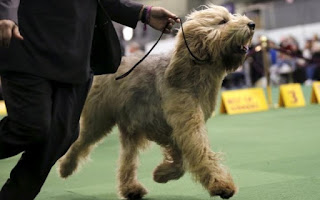 Waking up to hang out with the family around the breakfast table, the Otterhound will be ready for his morning walk. Once back inside, he’ll snooze before the gang leaves. When alone, he’ll ensure the home turf stays protected. Frequenting the backyard, he may swim a few laps in the pool. Once home, he’ll greet you with a furry smile. After a rubdown and another walk, he’ll be ready to relax with the entire family.
Total
0
Shares
Share 0
Tweet 0
Pin it 0
Share 0