Nicknamed the “Smiling Sammie,” the gentle and outgoing Samoyed loves his family, including cats if he’s raised with them. This reindeer herder is a tad stubborn, and positive reinforcement training works best with him. His beautiful white coat must be groomed two or three times a week and sheds heavily. 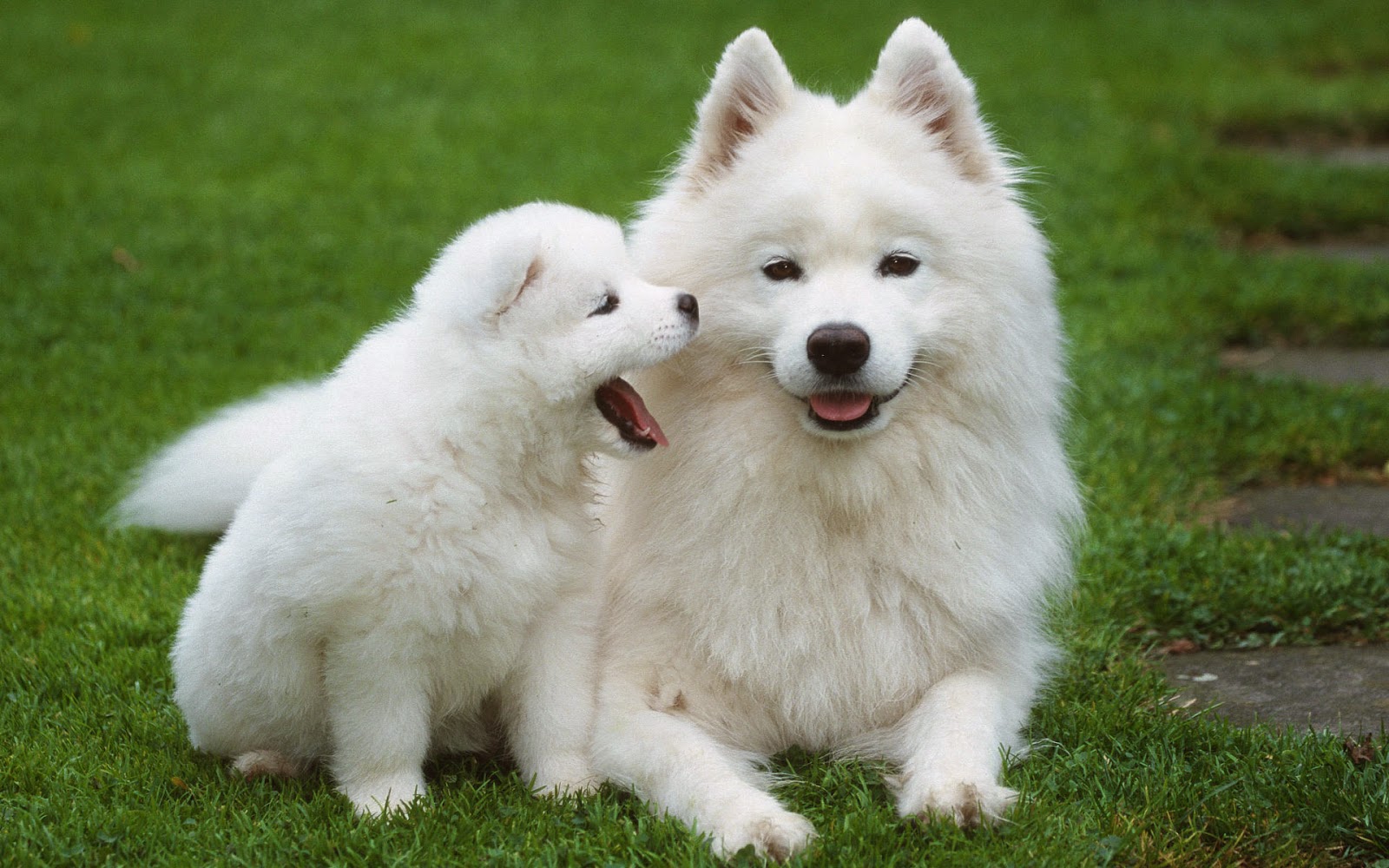 Originally bred to hunt, haul sledges, and herd reindeer, the Samoyed dog breed proved a valuable companion for northwestern Siberia’s Samoyede people. Among the breed’s duties: pack hiking, tracking, and warming their owners by sleeping on top of them at night. A working breed, the Samoyed can be strong-willed at times, but above all they remain friendly, gentle, and devoted family dogs.

Overview
Sam, Sammy or Smiley, the Samoyed is known to have many nicknames and with a smile that can light up any room, you can bet “Grumpy” is never one of them. Among many cool-weather jobs, the Samoyed was born to herd and protect reindeer but its primary function was to keep adults and children warm in the most freezing of temperatures. A natural-born cuddle bug, the Samoyed loves nothing more than snuggling up to his human counterparts.
The Samoyed combines strength, agility, dignity and grace in a general spitz outline. Slightly longer than it is tall, it is nonetheless compact. It has a strong, muscular body that is able to combine power, speed, agility and endurance. It has a quick, agile stride with good reach and drive. Its double coat is heavy and weather resistant. The undercoat is soft and thick, whereas the outer coat is straight and harsh, standing straight out from the body, and glistening with a silver sheen. Its expression is animated, with the characteristic “Samoyed smile” created by the upturned corners of its mouth.
Gentle and playful, the Samoyed makes a good companion for a child or person of any age. It is a closely bonded family dog. It is amiable with strangers, other pets and usually, other dogs. It is calm indoors, but this clever, sometimes mischievous breed needs daily physical and mental exercise. If allowed to become bored, it will dig and bark. It is independent and often stubborn, but it is willing to please and is responsive to its owner’s wishes. It may tend to herd children. 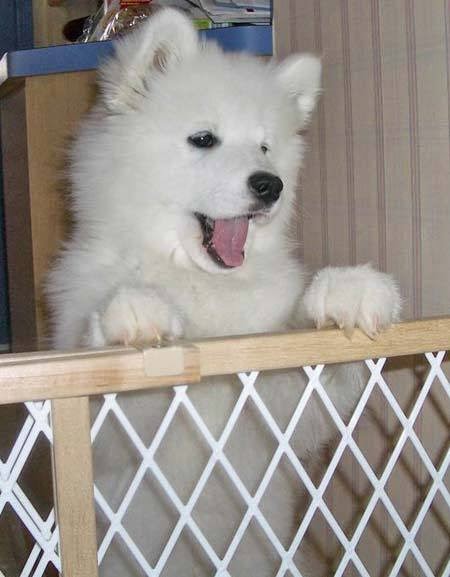 The Samoyed is a strong, beautiful working dog with a muscular body, a heavy, weather-resistant white coat tipped with silver, and a plumed tail that curves over his back. His wedge-shaped head is surrounded by a ruff, more prominent on males than females. He has dark-brown almond-shaped eyes, a black or sometimes brown or flesh-colored nose, and erect ears. The mouth curves up at the corners, giving him a smiling expression.
The Samoyed’s name can be tricky to pronounce. Most people call him a “Sa-MOY-ed,” but the correct pronunciation is “Sammy-ED.” If that doesn’t trip lightly off your tongue, just call him a Sammy. Everyone else does.

Breed at a glance

Breed standards
The History of the Samoyed 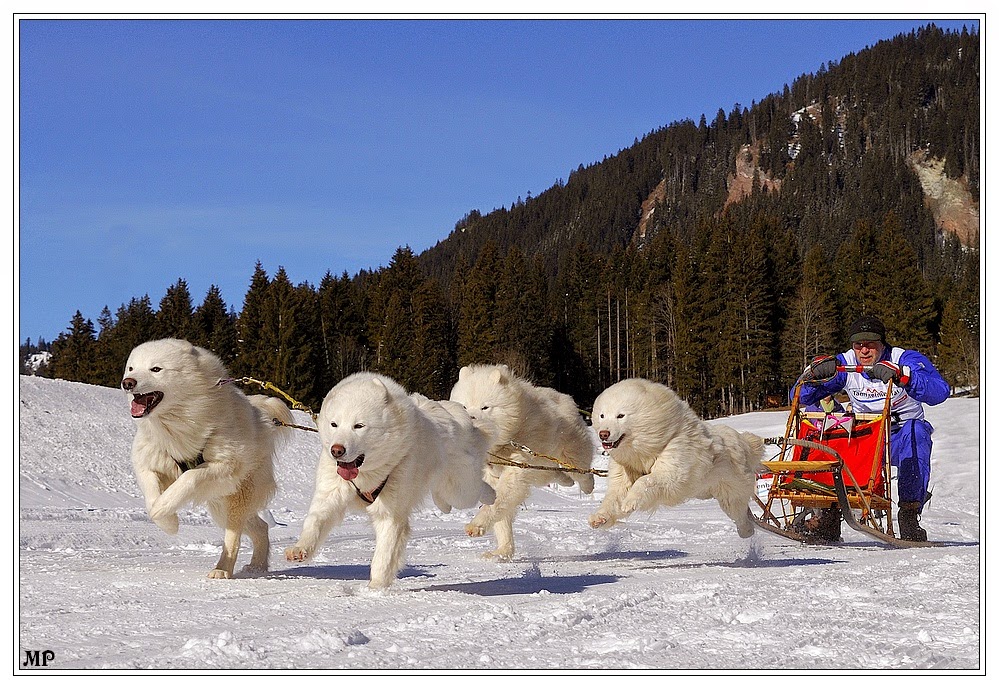 Legend says that the Samoyed people, and their dogs, were driven by other tribes far away, north and north and north, until at last they were on the very edge of the world, in a vast land of snow and ice. They lived as nomads, herding reindeer, aided by their able dogs, who also pulled sleds and kept them warm at night.
The Samoyed is one of fourteen breeds identified as ancient through DNA analysis of the canine genome. They give us a good picture of what some of the earliest dogs probably looked like.
The nomadic Samoyed people, for whom the Samoyed dog is named, came to northwestern Siberia from central Asia. They depended upon herds of reindeer for food and had to keep on the move so that the reindeer could find sufficient food for themselves. They also depended upon strong hardy spitz dogs to herd the reindeer and to guard them against the fierce predators of the Arctic. They occasionally helped to hunt bears and tow boats and sledges. These dogs lived as part of the family in the hide tents of their people, where one of their “jobs” was to keep the children warm in bed. The first Samoyeds came to England in the late 1800s, but not all these early imports were the pure white the breed is known for today. One of these dogs was presented to Queen Alexandria, who did much to promote the breed. Descendants of the queen’s dogs can still be found in modern pedigrees. In 1906, the first Samoyed came to America, originally a gift of Russia’s Grand Duke Nicholas. Meanwhile, the breed was becoming a popular sled dog because it was more tractable than other sledding breeds. In the early 1900s, Samoyeds formed part of the sled teams on expeditions to Antarctica and shared in the triumph of reaching the South Pole. The breed’s exploits, combined with its glistening good looks, soon won the public’s attention in America, and its popularity has grown tremendously since the Second World War. Although the once nomadic Samoyed people have long since settled in one place, the breed they created has journeyed around the world.
In more modern times, Samoyeds took part in Arctic and Antarctic explorations of Nansen, Shackleton, Scott, and Amundsen. Britain’s Queen Alexandra, wife of Edward VII, loved the breed, and many of her dogs appear in the pedigrees of English and American Samoyeds today.
The American Kennel Club recognized the Samoyed in 1906. Today he ranks 72nd among the breeds registered by the AKC. 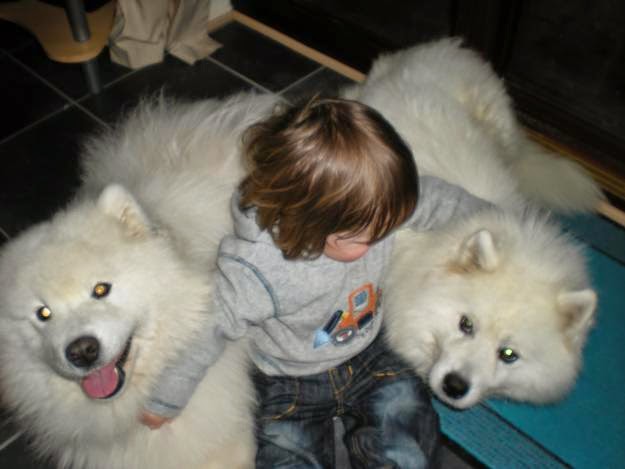 Everything about your Siberian Husky

Everything about your Basenji