Breeds with very short coats and little or no undercoat or body fat, such as Greyhounds, are vulnerable to the cold. Those with thicker coats and more body fat fare much better when temperatures drop. Dogs with a low cold tolerance need to live inside in cool climates and should have a jacket or sweater for chilly walks.

1. SAMOYED
Origin: Siberia
Fun Facts: This ancient breed was originally developed by the indigenous people of northwestern Siberia to herd reindeer, pull sleds and keep their owners warm. Early polar explorers used these dogs to traverse the harsh landscapes of the North Pole and South Pole. Because of their remote origins, Samoyeds developed independently of any other breeds, and are considered one of only four dog breeds in the world descended directly from wolves.

2. AKITA
An Akita is truly a royal pup—hailing from Japan, this breed was once only owned by the Imperial family. Statues of the Akita were also given as gifts to new parents to bring health, happiness, and a long life. This dog, originally bred as a cold-weather hunting companion with a dense undercoat and harsh outer coat, can often be independent and stubborn, but will remain protective and loyal to its family. 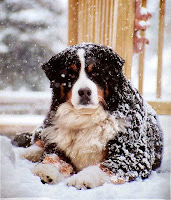 3. BERNESE MOUNTAIN DOG
Origin: Switzerland
Fun Facts: The hardy, long-coated Bernese Mountain Dog is most at home in cold weather. It’s mainly used for hauling and driving herds of cattle in the mountainous region of Canton of Berne in Switzerland. Ancestors of the modern-day Bernese are believe to have been brought to Switzerland 2,000 years ago by Roman soldiers.

4. ALASKAN MALAMUTES
Thanks to its dense, double fur coat with a rough outer layer and a thick and woolly, oily undercoat, the Alaskan malamute is able to survive extremely cold temperatures. The breed was famously used as a utility dog during the Klondike Gold Rush in the late 1800’s; members of the breed also accompanied Admiral Richard Byrd on his expedition to the South Pole in 1928 and the breed also served primarily as search and rescue dogs in Greenland during World War II. 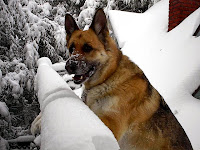 5. GERMAN SHEPHERD
The breed’s popularity grew with Rin Tin Tin, the abandoned German Shepherd pup found during WWI who went on to star in TV shows and movies. Known for their herding, guarding, and police work, German Shepherds are strong, agile, hard workers that have a lot of energy and learn quickly. This breed commonly suffers from hip dysplasia, which can likely be avoided by buying from a credible breeder.


6. GREAT PYRENEES
Origin: Central Asia and France/Spain
Fun Facts: This large, gentle breed is named after the Pyrenees mountain range in southwestern Europe where these dogs were used to guard herds of sheep. The breed has a weather-resistant double coat to protect it from the elements out on the slopes. The Great Pyrenees were first brought to the U.S. in 1824. 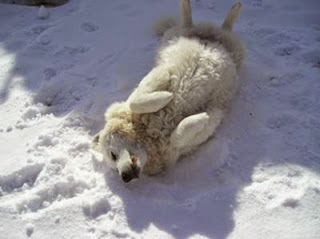 To be considered a true Kuvasz, this dog must always sport white fur, according to the American Kennel Club. Originating in Tibet, the Kuvasz—which means “armed guard of nobility” in Turkish—was later owned by the royal family in Hungary before finding a more “common” lifestyle as a light-footed hunter and herder. The Kuvasz’s double coat makes it a perfect mountain dog, and its trainability and fearless protective instincts provide a perfect four-legged companion. A fenced-in, open yard works best for this energetic, yet possibly destructive, breed.

8. NEWFOUNDLAND
Origin: Canada/England
Fun Facts: The Newfoundland’s thick, dense coat makes it the perfect dog for the snowy winters on the Canadian island for which it’s named. The breed is also strong enough to haul drowning victims ashore, with the additional ability to swim long distances. A Newfoundland was the chosen pet of numerous United States presidents, including Grant, Buchanan and Hayes.

9. SIBERIAN HUSKY
Origin: Siberia
Fun Facts: The quintessential sled dog, Siberian Huskies have a thick, layered coat made up of a dense undercoat for insulation and a coarse top coat. They’re an ancient breed, believed to have been bred by the Chukchi tribe of northeast Asia. With strong hunting instincts, it is advised to keep Huskies away from small animals. 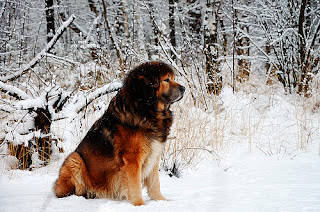 DNA studies have revealed that the Tibetan mastiff—which isn’t technically a “mastiff” by breed—genetically descended from the wolf more than 58,000 years ago, as compared to common dog breeds who trace back to wolves 42,000 years ago. Used maily as a guard dog for nomadic cultures in Central Asia to protect herds, flocks, tents, villages, monasteries, and even palaces, the Tibetan mastiff can have one of two “looks”: Lion head or tiger head. One resembles an oversized chow while the other looks like a super-sized Bernese mountain dog. The breed has a thick double coat which requires routine care in order to maintain good health.

Everything about your Siberian Husky