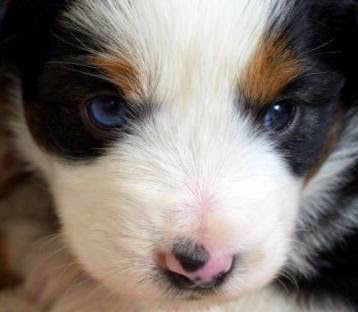 Genetically, there are four ways in which a dog can have blue eyes. Three of these are linked with pigment loss in the coat.
The most common way is as a side effect of the merle gene. Merle dilutes random parts of the pigment, including the eyes and nose. This sort of dilution causes blue colour in the iris. Because of the random pigment loss, often merle dogs have “butterfly” noses and blue, wall or split eyes. Wall eyes are when a dog has one blue eye and one brown or amber eye, and a split eye has some blue in it and the rest is brown or amber. Split eyes vary from mostly blue to mostly brown or amber.
The more dilution there is in the coat of a merle , the more likely they are to have blue eyes or a butterfly nose. A heavily merled dog  is unlikely to have either of these traits. Double  merles are highly likely to have blue eyes and a completely or almost completely pink nose because of the combination of merle dilution and large amounts of white around the face .
The second way in which blue eyes can occur is when a dog has large amounts of white around its eyes. White areas on the coat are where the cells are unable to produce any pigment, so if these areas spread to the face then there may be pigment loss in the eyes and on the nose, making the nose pink and the eyes blue. This only tends to occur on very high-white dogs with the extreme spotting pattern, such as white Boxers, and even then is fairly unusual.
The third way is when a dog is affected by the C series. The C series is albino. There are no confirmed cases of true albinism in dogs, however “white” Dobermanns have a very light coat, blue eyes and a fully pink nose, and this is thought to be a form of albinism.
Lastly, blue eyes can be inherited as a completely separate gene, unaffected by coat colour. This gene is, however, rare. It is rumoured to occur occasionally in the Border Collie, but mainly it’s seen in the Siberian Husky. Huskies can have one or both blue eyes, regardless of their main coat colour, ranging in shade from almost white to sky blue. This is particularly striking when seen on black dogs. 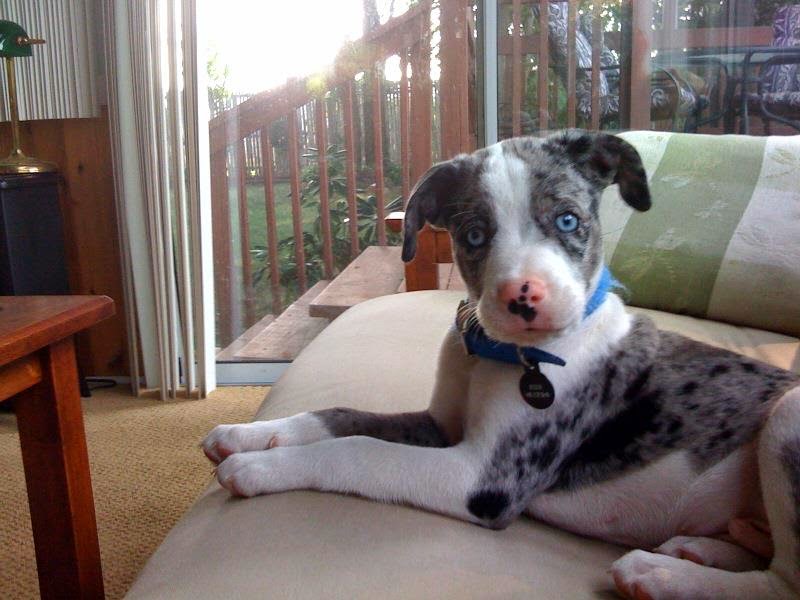 Therefore, any breed of dog can be born with blue eyes in spite of its breed and coat color. Even if the puppy’s parents do not have blue eyes, a puppy can have it. Of course, this is a very rare case.
Let’s talk more about those dogs that mostly may have blue eyes regardless of the color of their coat. 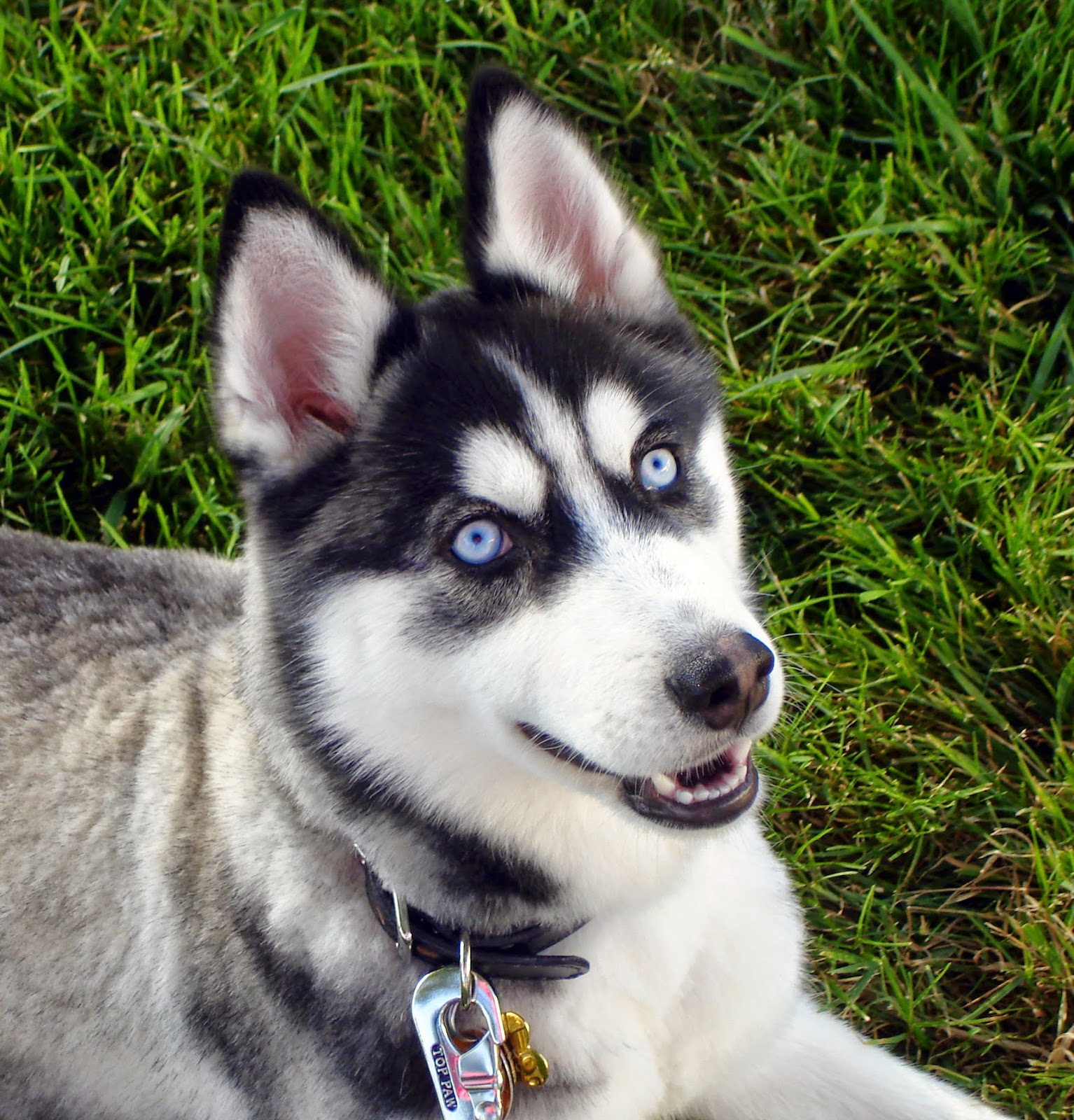 Siberian Husky. Sledge dog breed is considered one of the oldest dog breeds. These dogs can be several colors, from black to white. Usually white are muzzle and belly. Eyes are blue, brown, amber color. The dogs may have different eyes – for example one blue and one brown. At present, very popular with dogs Sky-blue eyes. This is a very strong dogs that can survive in extreme cold. In terms of the character of these dogs can distinguish three features – a energetic, playful and friendly dog. These dogs love human company and do not like to be alone. They are not suitable for protection. Huskies rarely bark, but sometimes screaming just for fun. For these dogs require strenuous physical exercise, about 80-100 minutes. However, these dogs are prone to escape, so better to let go of their fenced area. 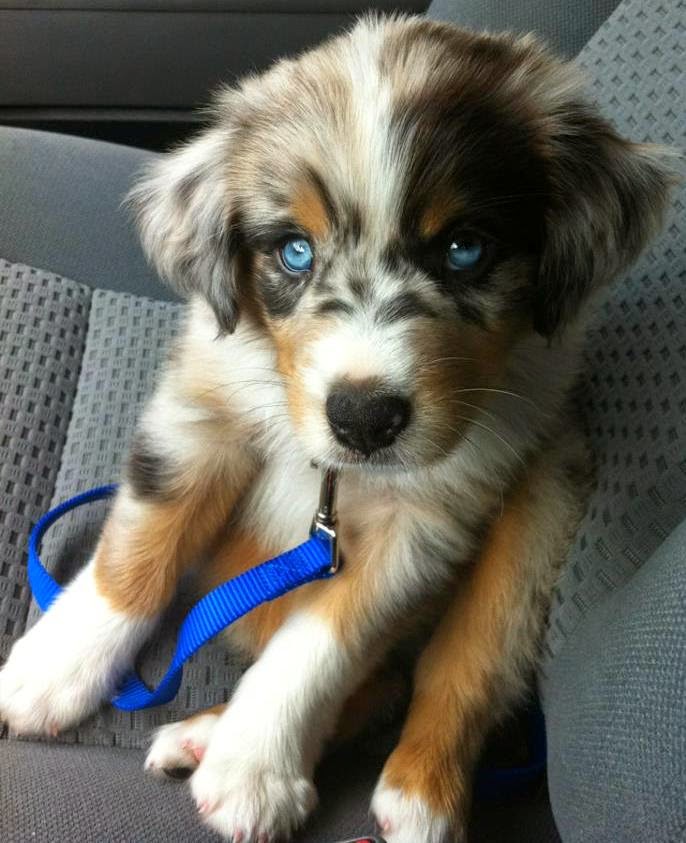 Australian Shepherd. This breed name may be misleading, because these dogs are descended not from Australia as it may seem, but they are from United States. In ancient times, these dogs are cared for very large flocks of sheep. It is a medium-sized dogs. Their fur can be black, blue marble, red marble, brown tri-color, black and white. Their coat is with spots and star on the head. Australian Shepherd eyes are amber and brown, blue and azure. One of the finest Australian Shepherd properties are big desire to please their owners, so these dogs are fast learners and great friends. These dogs are good guard dogs. They are wary of strangers, but not fearful. They are noisy – lots of bark and howl. This breed is affectionate and playful, but without sacrificing the basic working instinct. They need a big physical exercise, about 80-100 minutes. They are not enough for walking, but be free and jogging. 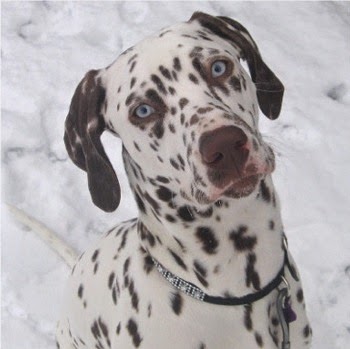 Dalmatians
Blue-eyed Dalmatians are thought to have a greater incidence of deafness than brown-eyed Dalmatians, although a mechanism of association between the two characteristics has yet to be conclusively established. Some kennel clubs discourage the use of blue-eyed dogs in breeding programs. 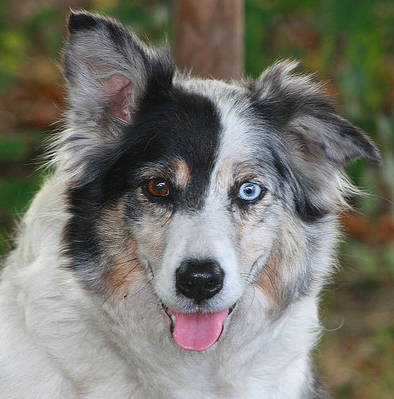 Border Collies.
Some people think that the blue eyes come from a Husky ancestor, but that is not true. The blue eye color always appears in the Border collie. Border Collies with 2 eye colors was once considered useful, or desirable for working Border Collies. Blue eyes are often called glass eyes, or watch eyes.If a Border collie has a white head and blue eyes, it would very likely become deaf. 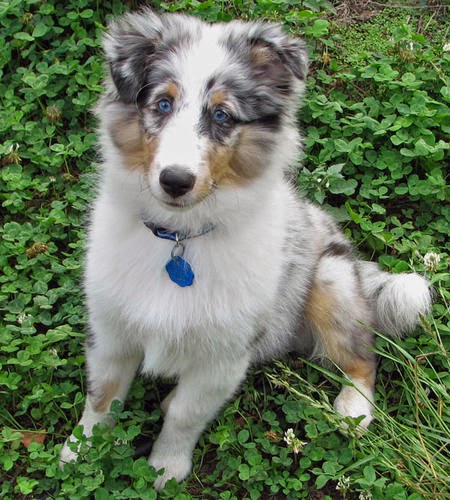 Note that many of these dogs are blue eyed because of the dominant merle coat colour gene, which may be connected to deafness. The blue-eyed factor in Siberians is NOT connected with deafness, unlike some of the other breeds in which blue eyes may occur. Deaf Siberians are very, very rare. The Merle gene is actually a semi-lethal dominant: dogs with one dose of Merle show the effects of the gene – scattered patches of missing pigment – including on the iris of the eye. They will also show a structural defect of the iris called ‘iris coloboma’. Dogs with two doses of the merle gene are frequently deaf and seem to have otherwise reduced vigor.
It is important to add that the blue eye colouring is a recessive gene existing in almost all breeds. In other words, any dog can have blue eyes regardless of its breed and coat colour. A puppy can be born with blue eyes even though its parents do not have it. This is a rare instance though. Moreover, in some breeds blue eyes are considered a disqualifying fault .
Some dog breeds such as Weimaraners have blue eyes as puppies. As they grow up, the eye colour change. 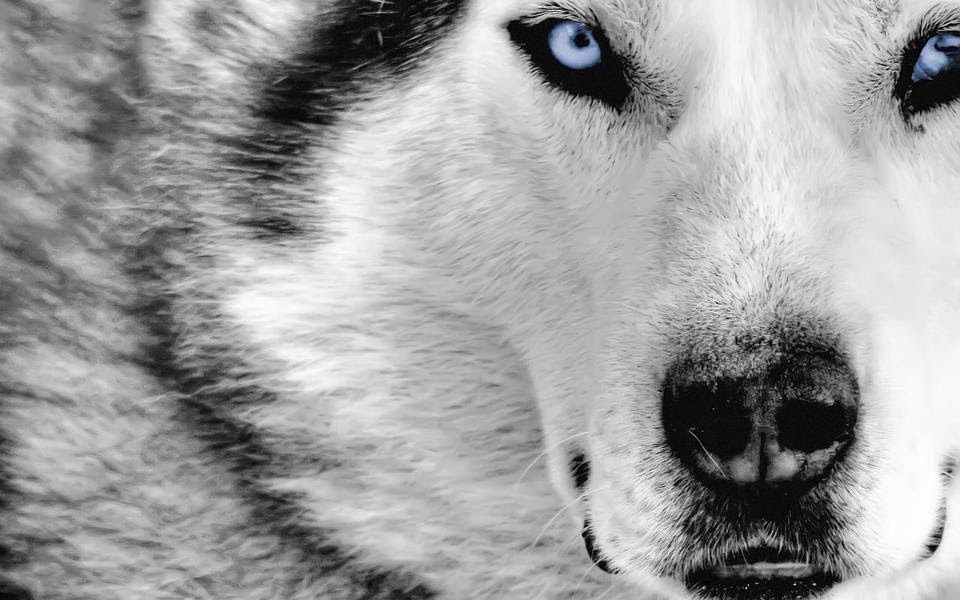 However, blue eye coloring is a recessive gene in most breeds. Even if the breed is not known for it, and the parents do not have it, a puppy can still be produces with one or both eyes blue. This means that ANY breed can throw a blue eyed pup in a very rare instance. Health concerns associated with blue eyed dogs are cateracts and deafness, so be sure you get your puppy from a reputable breeder.

The Most Expensive Dog Breeds

Everything about your Border Collie