Depending on the breed, a dog’s sense of smell is 1,000 to 10,000 times more sensitive than a human’s. A human has 5 million scent glands, as compared to a dog that has 125 million to 300 million. When a dog smells something, it can tell a lot about it; it’s almost like reading a book—where the object has been, what it has eaten, what it has touched, etc. Deaf dogs rely on their nose and eyes, and those senses become even more sensitive. It is important when grooming a deaf dog not to cut off its whiskers, as dogs use these to sense the distance of things around them. 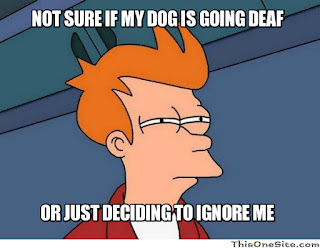 When a dog gets old, it may begin to lose its eyesight and ability to hear. While this may be traumatic for you to witness, it is much more stressful on the dog. Imagine suddenly not being able to hear familiar noises, find things around the house, or see who is approaching you.
Deafness refers to the lack/ loss of an animal’s ability to hear, this can either be complete or partial loss. If the dog is deaf at birth, it will be very apparent to you at a young age.
More than 30 breeds of dogs have a known susceptibility for deafness, including the Australian shepherd, Boston terrier, cocker spaniel, Dalmatian, German shepherd, Jack Russell terrier, Maltese, toy and miniature poodle, and West Highland white terrier. Typically, it is more common in senior dogs.

Symptoms
Dogs that are undergoing hearing loss may appear disobedient and ignorant of commands. A dog with extreme hearing loss will not typically respond if you snap your fingers next to its ears or make an unfamiliar noise that typically warrants a reaction. A dog’s ears tend to move around and twitch as they take in sounds around them. If a dog has ears that remain still, this could be a sign that they are going deaf.
Dogs typically show more obvious symptoms of hearing loss than do cats. Of course, it is easier to identify deafness in a dog born without hearing than in one who develops deafness gradually. In either case, signs of deafness include:

Diagnosis
Early age onset usually suggests birth defects  in predisposed breeds. On the other hand, brain disease is a slow progressive disease of the cerebral cortex, usually caused by senility or cancer,  making the brain not able to register what the ear can hear. Bacterial cultures and hearing tests, as well as sensitivity testing of the ear canal, may also used to diagnose the underlying condition.
Treatment 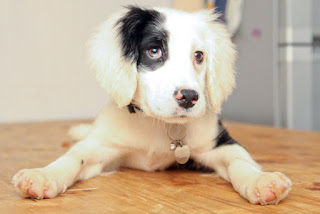 There really is no way to “treat” deafness in dogs. The therapeutic goals are basically to prevent deafness from developing in the first place and to improve an affected dog’s hearing ability if at all possible. The best way to deal with canine deafness is with kind, careful and consistent training, management and care of affected animals.
There is no realistic treatment for congenital deafness in dogs, whether it is hereditary or otherwise. Puppies born with a limited or absent sense of hearing almost always will be unable to hear sounds for the rest of their lives. There also is no practical way to treat dogs with acquired nerve-related deafness or hearing loss. Some veterinary teaching hospitals and other highly specialized veterinary facilities offer customized hearing aids for dogs with limited hearing disabilities, but these are extremely expensive and largely useless for most causes of canine deafness. Certainly, dogs with temporary hearing loss caused by ear infections, tumors or build-up of wax and other debris can be treated by removing the causative agent either medically or surgically. Otherwise, deafness is usually irreversible and permanent. 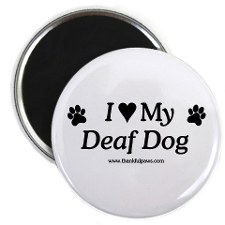 Dogs with partial or complete deafness can live normal, happy, productive lives. They can do therapy work, scent and sight tracking, obedience, agility and pretty much anything else that hearing dogs can do. Deafness is a disability that requires special attention by owners but does not prevent most affected dogs from living every bit as full a life as any dog with normal hearing capabilities. If your dog is deaf or seems to be losing its hearing, schedule an appointment with your veterinarian. Hearing loss is not a life-threatening condition. However, it is worthwhile to determine whether there are any correctible conditions that are contributing to a dog’s loss of hearing.