Easygoing, sweet, kind, and loyal, the American Foxhound dog breed belongs to a way of life that has continued for more than two centuries, but he has the potential to be a modern-day companion as well. His stamina and love of running make him a great jogging partner for athletic owners, and his mild nature makes him an excellent family dog, so long as he gets the exercise he craves. 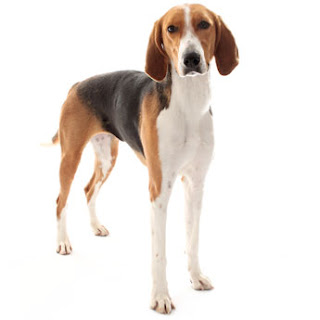 The American Foxhound, also known simply as the Foxhound, is one of the few breeds that truly originated in the United States, and is also one of the most rare. It resembles a taller, somewhat lankier version of its ancestor, the English Foxhound. The American Foxhound is known for its keen scent-tracking ability, its affable personality and its song-like voice. This breed typically is too friendly to make a good watchdog, being more likely to welcome strangers into the home rather than sounding an alarm or providing meaningful protection. The American Foxhound was admitted into the American Kennel Club in 1886, as a member of the Hound Group. 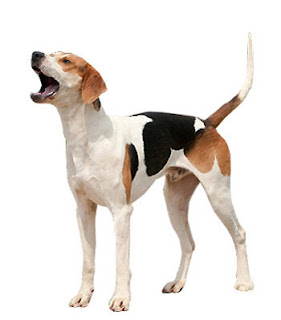 Breed standards
AKC group: Hound
UKC group: Scenthound
Average lifespan: 10-12 years
Coat appearance: Short, smooth
Coloration: Any
Hypoallergenic: No
Other identifiers: Taller than other breeds, with a stronger sense of smell; long, lean legs; large, dome-like head; wide-set eyes with a genuine and kind expression; ears frame face and are against head; tail curved upward.
Possible alterations: Eyes may be hazel or brown in color.
Comparable Breeds: Basset Hound, Beagle
History
In 1650, Robert Brooke sailed from England to Crown Colony in North America with his pack of hunting dogs, which were the root of several strains of American Hounds. These dogs remained in the Brooke family for nearly 300 years. George Washington received French Foxhounds, Grand Bleu de Gascogne,  as a gift from the Marquis de Lafayette.

Many of the dogs Washington kept were descended from Brooke’s, and when crossed with the French hounds, helped to create the present day American Foxhound.

The American Foxhound is known to originate from the states of Maryland and Virginia, and is the state dog of Virginia. Though there has long been a rumor that the new breed was originally used for hunting Indigenous peoples of the Americas, this is not true. The breed was developed by landed gentry purely for the sport of hunting foxes. With the importation  of the red fox, Irish Foxhounds were added to the lines, to increase speed and stamina in the dog, qualities still prevalent in today’s dogs.
One quality that the American Foxhound is famous for is its musical howl that can be heard for miles. This is actually one reason that this breed does not do well in city settings. The breed was first recognized by the American Kennel Club in 1886. Today, there are many different strains of American Foxhound, including Walker, Calhoun, Goodman, Trigg, July and Penn-Marydel. Though each strain looks quite different, they are all recognized as members of the same breed. Most show hounds are Walkers, many of the pack hounds  are Penn-Marydel and hunters use a variety of strains to suit their hunting style and quarry.
Personality 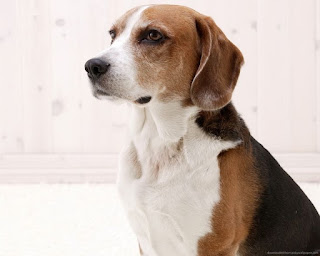 While they’re mainly sweet and easygoing, American Foxhounds have the independent and stubborn nature that’s common to hounds. They’ve been bred to hunt with very little direction from their human companions, and they don’t necessarily see why they should have to do things your way.
Foxhounds who’ve been raised in the company of other dogs, rather than with a human family, can be challenging because they’ve bonded more with their pack than with people.   They’ll need more time, attention, and training to help them get used to life as a family dog.
Like every dog, Foxhounds need early socialization — exposure to many different people, dogs, sights, sounds, and experiences — when they’re young. Socialization helps a Foxhound puppy grow up to be a friendly, well-rounded dog.
Health
All purebred dogs have the potential to develop genetic health problems, just as all people have the potential to inherit a particular disease. Run, don’t walk, from any breeder who does not offer a health guarantee on puppies, who tells you that the breed is 100 percent healthy and has no known problems, or who tells you that her puppies are isolated from the main part of the household for health reasons. A reputable breeder will be honest and open about health problems in the breed and the incidence with which they occur in her lines.
That said, American Foxhounds are a pretty healthy breed. Hip dysplasia and ear infections are seen occasionally, but not frequently enough to be considered a concern. Other conditions include a platelet disorder called thrombocytopathy, and a white blood cell disorder called Pelger-Huet anomaly.
Care 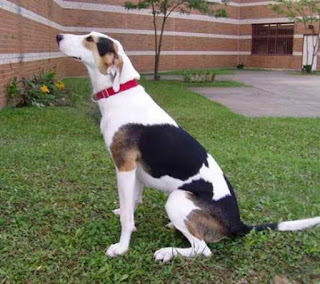 Bred to be a fast hunter who can run for miles, the American Foxhound needs a substantial amount of exercise. If he’s not going to be a hunting companion, he’ll need daily runs or some other form of exercise to help him burn off his natural energy. He’s best suited to a home with a yard — or better yet, an acre or two; he’s probably too loud for condo or apartment living.
Often raised in outdoor kennels with a pack of dogs, the American Foxhound is used to roughing it, and can live outdoors if he’s got a good shelter and another social dog to keep him company. If he’s an only dog, however, he should live indoors with his human pack so he won’t get lonely.
Obedience training is highly recommended to help the independent Foxhound view you as leader of the pack. He won’t respond well to punishment-based training, so use treats and praise to reward him for doing as you ask. And “ask” is the operative word. Hounds will flat-out ignore you if you try to boss them around. Keep an old Southern adage in mind when training an American Foxhound: you catch more flies with honey than with vinegar.
Living Conditions
American Foxhounds are not recommended for apartment life. They are very active indoors and do best with acreage.
Trainability 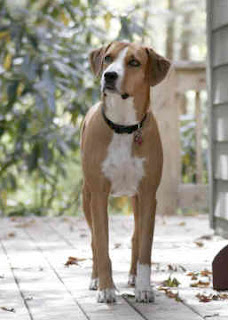 Foxhounds are moderately easy to train, as are most hound breeds, but the trainability of individual Foxhounds varies. Some are easier to train whereas others are downright difficult. In general, they don’t have the longest attention spans, so training should be conducted in short spurts and should not be overly repetitive. Patience is the key ingredient needed when training any type of hound, and calm-assertiveness is also important. Treating a Foxhound harshly will only lead to avoidance behaviors and flat out stubbornness.
Once leadership is established and basic obedience is mastered, Foxhounds can be graduated to advance obedience, tracking, or agility activities.
Exercise
This dog is extremely energetic and tireless. It is very important that it gets daily vigorous exercise to prevent extreme indoor restlessness. This breed should not be taken on as a family pet unless the family can guarantee plenty of vigorous exercise. They need to be taken on a daily, brisk, long walk, jog or run alongside you when you bicycle. While out on the walk the dog must be made to heel beside or behind the person holding the lead, as instinct tells a dog the leader leads the way, and that leader needs to be the human. Teach them to enter and exit door and gateways after the humans.
Grooming Needs
Grooming the American Foxhound is a breeze. They shed lightly year round, but weekly brushing with a hound mitt is enough to keep loose hair under control. Only bathe as needed, when the dog is dirty or begins to smell. Individual dogs will determine how often bathing is necessary.
Check the ears on a regular basis for signs of wax buildup, irritation or infection. Clean the ears with a cotton ball and a veterinarian-approved cleanser. Trim nails once per month, if the dog does not wear down the toenails naturally outdoors. Brush teeth weekly  to prevent tartar buildup, promote gum health, and keep bad breath at bay.
Children And Other Pets 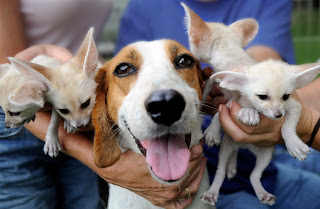 American Foxhounds are patient and loving with children, and it’s not unusual to hear of a child learning to walk by holding onto the family Foxhound. That said, as with any breed, you should never leave a dog and a young child alone together. They should always be supervised to prevent any ear biting or tail pulling, by either party.
Bred for living in large packs, American Foxhounds are always happy to have the company of other dogs. A bored hound will find ways to entertain himself — destructive ways that you won’t like — so if no one’s home during the day, it’s best if he has at least one canine buddy.
American Foxhounds can get along well with cats, rabbits, and other pets if they’re raised with them in the home. Even so, don’t leave them unsupervised with other pets until you’re sure they all get along.
Is this breed right for you?
Not meant for apartment living, American Foxhounds need a home with a lot of land to roam. A loyal dog for families, this breed will need to be exercised regularly with walks, runs or hunts. Best for hunters or people with active lifestyles, this breed can be very protective of his human kind. Meant to work in packs, American Foxhounds pair easily with other pups but not any other animal.
Did You Know? 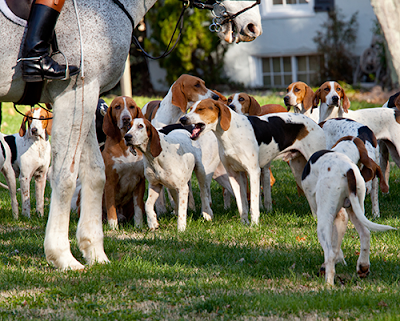 American Foxhounds do four different types of work. Some Foxhounds run in field trials. Slow-trailing hounds with good voices are used by hunters with guns. Drag hounds follow an artificial scent. Packs kept by hunt clubs follow the fox as an exercise in houndsmanship and horsemanship.
A dream day in the life of an American Foxhound
Starting his day off with an early morning hunt, the American Foxhound loves to stay busy. With little downtime in the home, he would love to accompany his owner for a day on the farm or on the trails. Stopping for little rest, this pup wants to hunt, run and listen to all of the commands that his pack leader — you — throw at him.