The Cesky (pronounced Chess-key) Terrier, or Bohemian Terrier is a relatively new breed of terrier created by the Czech geneticist Frantisik Horak in 1948. Bred to hunt in packs, the Cesky Terrier  is a short-legged and well-muscled dog. Its head is wedge shaped and its high-set, triangular shaped ears fold forward onto its head. The Cesky’s coat is distinctively long and silky and its face sports a bushy beard, moustache and eyebrows. 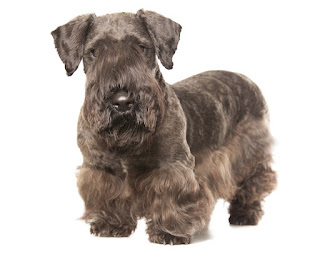 The result of a cross between a Scottish Terrier and a Sealyham Terrier — with the goal of creating a dog that could go after vermin without getting stuck in their dens — the Cesky  was created in 1948 in what was then Czechoslovakia.
Mellower than most terriers, the Cesky needs moderate amounts of exercise. And unlike many terriers, he has the advantage of a soft coat that can be trimmed with clippers rather than requiring hand-stripping
Loving and devoted, he’s also active enough to compete in earthdog trials, agility, obedience, and tracking. The Cesky is also a successful therapy dog. He gets along well with children and other pets, especially if he’s raised with them. 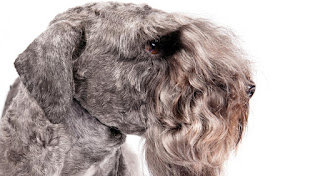 AKC group: Terrier Group
UKC group: Terrier
Average lifespan: 10 to 15 years
Average size: 14 to 24 pounds
Coat appearance: Fine, Long, and Silky
Coloration: shades of gray from charcoal to platinum (black pigmented) or rarely brown (liver pigmented)
Hypoallergenic: Yes
Best Suited For: Families with children, active singles, active seniors, houses with yards
Temperament: Mild, reserved, calm, cheerful
Comparable Breeds: Sealyham Terrier, Scottish Terrier
History
The Cesky Terrier was created by a Czech breeder, František Horák, in 1948, as a cross between a Sealyham Terrier and a Scottish Terrier, to create a terrier suitable for hunting in the forests of Bohemia. Although not a trained scientist, Horák worked for many years as a research assistant at the Czechoslovak Academy of Sciences and used knowledge gained there in his dog breeding. Czechoslovakia was ruled by a communist regime at the time; when Horák’s dogs became more popular around the world, he began to receive a large volume of mail from outside the country, which earned him the attention of the secret police.Horák died in 1997. 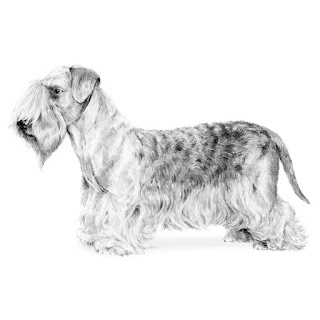 The Cesky Terrier was recognized for international competition by the Fédération Cynologique Internationale in 1963 as breed number 246 in Group 3, Terriers. The breed is now recognized by all of the major kennel clubs in the English-speaking world. The Cesky Terrier is one of the six most rare dog breeds worldwide.
The breed was first imported into the USA in the 1980s by a group of enthusiasts. They formed the Cesky Terrier Club of America in January 1988. As interest grew, the breed became eligible to join the American Kennel Club (AKC) Foundation Stock Service Program from January 1, 2004 allowing it to compete in AKC Earthdog tests. At this stage the American Cesky Terrier Fanciers Association was formed and recognised by the AKC. It is the club accepted as the parent club by the AKC. However, the Cesky Terrier Club of America remains active in promoting the breed in the USA. From mid-2011, the Cesky Terrier was able to compete in the terrier group in America as it was accepted for entry in the AKC Stud Book.
The breed first arrived in the UK in 1989 and had to compete from the imported register. The Cesky Terrier was recognised by the Kennel Club (UK) in 1990 and on January 1, 2000 it gained rare breed status. It has since competed successfully in show competition in the UK.
Temperament 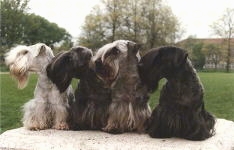 The Cesky Terrier is patient, playful, sporty yet calm. A sweet and joyful dog that is good with children, it is brave, loyal, obedient and courageous. Intelligent, very trainable and easy to handle, it is important to socialize them while they are puppies, letting them meet with various people and different animals in positive circumstances to experience a variety of situations. This will help them be well adjusted so they can grow up to be happy adults.   They love people, especially children and are fairly friendly with strangers, but like most terriers, if you are not 100% pack leader, they can be feisty, stubborn and fearless. This sociable dog gets along well with other dogs and with other household animals. The Cesky travels well. It is an excellent companion dog that is capable of playing with children, yet at the same time being an attentive and threatening house guard. Make sure you are this dog’s firm, confident, consistent pack leader to avoid Small Dog Syndrome, human induced behavior problems. Always remember, dogs are canines, not humans. Be sure to meet their natural instinct as animals.
Health
This dog breed has a life span of 12 to 15 years with general good health. The only known common health condition in Cesky Terriers is Scottie Cramp, which causes the dog to have locomotive problems due to a lack of serotonin in the body. This disease is not life threatening.
Care 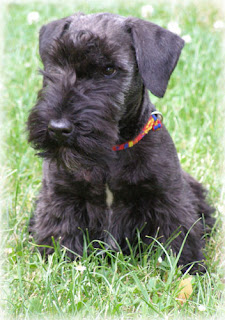 The Cesky Terrier requires an average amount of exercise such as a long walk per day. Although this breed, like other terriers, enjoys digging and open space outside, the Cesky Terrier can make a good apartment dog as well. Due to the longer coat, the Cesky Terrier requires grooming and hair clippings monthly.
Living Conditions
The Cesky Terrier is a good dog for apartment life. They are moderately active indoors and will do okay without a yard.
Training
Originally bred as hunting dogs, Cesky Terriers are highly intelligent and extremely obedient, making them fairly easy to train. However, like most terrier breeds, they can be willful and stubborn when not given strong leadership. Therefore it is important to maintain a calm and assertive authority when handling this dog.
Activity Requirements
The Cesky is an active breed that needs daily exercise to stay physically and mentally well-tuned. It does not do well living exclusively outdoors or spending most of its time in a kennel or crate away from its people. This is a breed that can thrive in large homes as well as in homes where space is limited, as long as there is regular play and exercise time. A securely fenced yard where the Cesky can stretch its legs and run freely is great for this breed, as are daily walks at the park or around the neighborhood. Ceskys can be sensitive to outdoor conditions and do not enjoy being in extreme temperatures or weather, preferring to stay warm and dry inside. Although it gravitates to a leisurely lifestyle, the Cesky still loves to, and needs to, get regular playtime. It is always ready for a game of fetch with its owner – or anyone else, for that matter. This is not a breed for people who don’t have time to spend with their dog. Cesky Terriers crave attention and above all want to be with their family.
Grooming 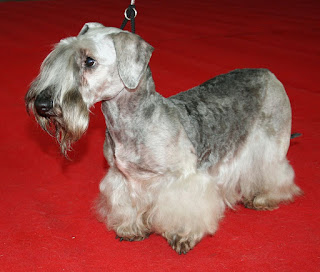 The Cesky is a coated breed, so don’t get one if you’re not willing to put in time for grooming. Cesky puppies need daily grooming, and adults must be brushed once or twice a week. To maintain its appearance, the coat must be trimmed every four to six weeks. You’ll also want to clean your dog’s beard after he eats or drinks. You can have him groomed professionally or learn to do it yourself.
The rest is basic care. Trim the nails as needed, usually once a month. Brush the teeth frequently for good overall health and fresh breath. Check the ears weekly for dirt, redness, or a bad odor that can indicate an infection. If the ears look dirty, wipe them out with a cotton ball dampened with a gentle ear cleaner recommended by your veterinarian.
Is the Cesky Terrier the Right Breed for you?
High Maintenance: Grooming should be performed often to keep the dog’s coat in good shape. Occasional trimming or stripping needed.
Minimal Shedding: Recommended for owners who do not want to deal with hair in their cars and homes. 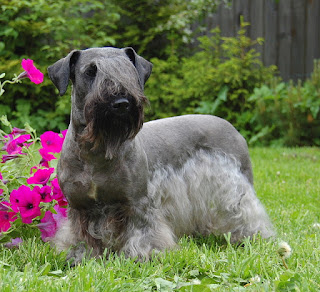 Difficult Training: The Cesky Terrier isn’t deal for a first time dog owner. Patience and perseverance are required to adequately train it.
Fairly Active: It will need regular exercise to maintain its fitness. Trips to the dog park are a great idea.
Good for New Owners: This breed is well suited for those who have little experience with dog ownership.
Good with Kids: This is a suitable breed for kids and is known to be playful, energetic, and affectionate around them.
Did You Know?
The Cesky Terrier is one of those breeds developed to work a certain type of terrain: in his case, the forests of Bohemia. The Cesky’s quarry ranges from duck and pheasant to fox, rabbit, and wild boar.
Total
0
Shares
Share 0
Tweet 0
Pin it 0
Share 0