Originally deployed in Scotland to retrieve hunted birds that had fallen to the ground, the Gordon Setter’s strong hunter’s instinct, skill with scents, and general companion qualities have made it a very popular breed indeed, as well as an enduring one. Having been officially recognized by the American Kennel Club in 1884, it is far ahead of many modern breeds that could be considered more popular. Today, a Gordon Setter is known as an excellent, loyal, and obedient breed that looks great with a properly-groomed coat but is also an ideal exercise partner and friend in the outdoors. This Scottish breed has been established since the 17th century and takes his name from Gordon Castle, where he was developed by the fourth Duke of Gordon. Dressed in sophisticated black and tan, the Gordon Setter is the heaviest and most muscular of the three Setter breeds. In the field, his job is to find and point gamebirds, working at a slow, methodical pace. Hunters appreciate his intelligence and scenting ability, but his good qualities aren’t limited to the field. enjoys participating in dog sports such as agility, obedience, rally, and tracking.
The gentle and protective Gordon can be a good choice for families with children. He’s tolerant toward toddlers and energetic enough to play catch for hours on end. He also gets along well with other pets such as cats if he’s raised with them. Gordon Setters are alert and will bark to let you know that someone is approaching. They are reserved toward strangers, preferring to save their affection for their families.
The Gordon is smart and easy to train with positive reinforcement techniques. Be patient and gentle, and he’ll respond eagerly. He’s not necessarily a barker, but he is vocal, expressing himself with mumbling and grumbling to tell you about his day, what he thinks of his meals, and when it’s a good time to take him for a walk.
Last but not least, it should go without saying that a people-loving dog like the Gordon Setter needs to live in the house. He’ll grow despondent relegated to the backyard with little or no human interaction. 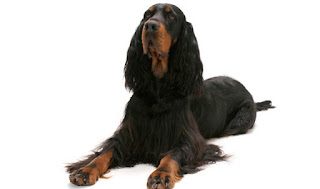 Breed standards
AKC group: Sporting
UKC group: Gun Dog
Average lifespan: 10-12 years
Average size: 45-80 pounds
Coat appearance: Long, Silky, and Thick
Coloration: black and tan coat, with the tan markings being a rich chestnut or mahogany
Hypoallergenic: No
Best Suited For: Families with children, active singles and seniors, houses with yards
Temperament: Devoted, gentle, affectionate, enthusiastic
Comparable Breeds: Golden Retriever, Irish Setter
History
Black and tan setting dogs were known in Scotland as early as 1620, but it was their presence in the kennels of the fourth Duke of Gordon 200 years later that brought them to prominence. The Castle Gordon Setters had first-class hunting skills and were beautiful as well.
The early Gordons also came in black and white, tricolor, and red, but the Duke was said to favor the dogs with black and tan coloring, and that’s what has prevailed over the years. When the Duke died in 1827, his heir, the Duke of Richmond, carried on his kennels.
Between 1859 and 1874, England’s Kennel Club listed 126 Black and Tan setters in its studbook. In June of 1859, at the first official dog show, a Black and Tan Setter by the name of Dandie, took first prize for setters, who could trace his pedigree back to the kennels of the Duke of Gordon. The breed officially took the name Gordon Setter in 1924.
The first Gordon Setters imported into the United States came from the kennel at Gordon Castle. The dogs, Rake and Rachel, were purchased by Daniel Webster and George Blunt in 1842. They were the foundation of the breed in the United States.
The American Kennel Club recognized the Gordon Setter in 1892, and the Gordon Setter Club of America, Inc., was formed in 1924. The club is still in existence today and boasts a membership of more than 1,000. Today the Gordon Setter ranks 88th among the 155 breeds and varieties registered by the AKC.
Personality
The loyal Gordon Setter is intensely devoted to his family but wary of strangers, characteristics that make him an excellent watchdog. He’s mannerly and eager to please, but like any dog he’ll take advantage of lax leadership and can become dominant, wilfull, and stubborn if not provided with firm, fair, consistent training. A Gordon Setter expert once wrote of the breed that if he acts sorry for a misdeed, he’s probably more sorry that he got caught than that he misbehaved. In the field or in any competitive situation, he’s alert, fearless, intelligent, and capable. He’s a personal hunting dog, in the sense that he works nearby rather than ranging far afield. Gordons aren’t fast, but they have a lot of stamina.
Temperament is affected by a number of factors, including heredity, training, and socialization. Puppies with nice temperaments are curious and playful, willing to approach people and be held by them. Choose the middle-of-the-road puppy, not the one who’s beating up his littermates or the one who’s hiding in the corner. Always meet at least one of the parents — usually the mother is the one who’s available — to ensure that they have nice temperaments that you’re comfortable with. Meeting siblings or other relatives of the parents is also helpful for evaluating what a puppy will be like when he grows up.
Like every dog, Gordon Setters need early socialization — exposure to many different people, sights, sounds, and experiences — when they’re young. Socialization helps ensure that your Gordon Setter puppy grows up to be a well-rounded dog. Enrolling him in a puppy kindergarten class is a great start. Inviting visitors over regularly, and taking him to busy parks, stores that allow dogs, and on leisurely strolls to meet neighbors will also help him polish his social skills. The Gordon Setter, which has an average lifespan of 10 to 12 years, is prone to major health issues such as gastric torsion and canine hip dysplasia, and minor problems like cerebellar abiotrophy, progressive retinal atrophy (PRA), hypothyroidism, and elbow dysplasia. To identify some of these issues, a veterinarian may recommend regular eye, hip, thyroid, and elbow exams for this breed of dog.

Care
Regular combing, which should be done every two to three days, is a must for the Gordon Setter, though an occasional trimming may also be required. A thorough daily exercise regimen is also essential for the breed. And although it is adaptable to temperate climates outdoors, it should be given plenty of human companionship.

Living conditions
The Gordon Setter is not recommended for apartment life. It is relatively inactive indoors (if a Gordon Setter gets enough outdoor activity it will be calm when it is indoors) and does best with at least a large, safely fenced yard where it can run free. Their hunting instincts lure them to roam, so a good fence around your property is essential. Gordons have a mind of their own and do not like to be bossed around. Training can be difficult and takes a strong, steady leader. Sessions should be conducted with an abundance of positive reinforcement and very little harsh discipline. Though establishing leadership can be a challenge, Gordons actually pick up on tasks quickly and have excellent memories. Once basic obedience is mastered and the Gordon Setter knows his place in the family hierarchy, he should be graduated on to advanced obedience or agility training to keep his mind active.
Housebreaking takes anywhere from four to six months with a Gordon Setter. They do not like to be told what to do or when to do it, so this process can be quite drawn out. Crate training is the best method for housebreaking a Gordon.

Exercise Requirements
These are voracious exercisers and will require plenty of it to keep from bouncing around the walls indoors. For this reason, it’s not recommended that you keep a Gordon Setter as a city pet. They’re more suited for plenty of space to have their “outdoor” itch scratched on a daily basis, and they generally require plenty of activity to feel calm at the end of a day. The Gordon has a long, thick coat with feathering on the ears, legs, belly, and tail. Depending on the type of terrain your Gordon is out in every day, you will probably need to brush and comb him one to three days a week to prevent or remove tangles and mats, remove dead hair, and distribute skin oils. In addition to brushing, you’ll need to trim the hair on the bottom of his feet and between his toes.
The Gordon Setter sheds moderately. The more often you brush him, the less hair you will find on your floor, furniture, and clothing.
Gordons love swimming and playing in water. Be sure to keep the ears clean and dry to prevent bacterial or yeast infections from taking hold.
The rest is basic care. Trim the nails as needed, usually every few weeks. Brush the teeth frequently for good overall health and fresh breath.

Children And Other Pets
Gordons are fond of and protective toward children. They’ll put up with a lot, and when they’ve had enough teasing or roughhousing, they’ll walk away. They may be a bit much for toddlers, though, being large enough to accidentally knock them down.
Always teach children how to approach and touch dogs, and always supervise any interactions between dogs and young children to prevent any biting or ear or tail pulling on the part of either party. Teach your child never to approach any dog while he’s eating or sleeping or to try to take the dog’s food away. No dog, no matter how friendly, should ever be left unsupervised with a child. Gordons get along with other dogs and cats if they’re raised with them, but they might not be so friendly toward strange dogs.

Is the Gordon Setter the Right Breed for you?
Moderate Maintenance: Regular grooming is required to keep its fur in good shape. Professional trimming or stripping needed.
Moderate Shedding: Routine brushing will help. Be prepared to vacuum often!
Moderately Easy Training: The Gordon Setter is average when it comes to training. Results will come gradually.
Very Active: It will need daily exercise to maintain its shape. Committed and active owners will enjoy performing fitness activities with this breed.
Good for New Owners: This breed is well suited for those who have little experience with dog ownership.
Good with Kids: This is a suitable breed for kids and is known to be playful, energetic, and affectionate around them.
Did You Know?
Developed by the Dukes of Gordon, the black and tan dogs were originally known as Gordon Castle Setters.
Total
0
Shares
Share 0
Tweet 0
Pin it 0
Share 0