The Irish Terrier dog breed was once described as the “poor man’s sentinel, the farmer’s friend, and the gentleman’s favorite.” Rugged and stouthearted, he has the advantages of a convenient size, versatile abilities as a companion, watchdog, and vermin dispatcher, and high train-ability. Versatility should be the middle name of the Irish Terrier. This breed is full of energy and has the courage of a lion. He doesn’t realize that he is a medium-sized dog. To him, he is the King and will take out any animal that he has not befriended. This breed will also chase anything that runs, including your neighbors and their children. A fenced yard is a must for this energetic fellow.
The Irish Terrier is playful. He will happily spend hours in the yard with your kids playing ball, hide and seek, fetch or even Frisbee. After a tough day of play, he will snuggle up to you on the couch and expect that his tummy will be rubbed until he drifts off to sleep. To learn more about the Irish Terrier, please read on.

Other Quick Facts
History
This red-headed son of Ireland — the only terrier with an all-red coat — is thought to be one of the oldest of the terrier breeds, although little is known of his origins. One writer referred to him as “the poor man’s sentinel, the farmer’s friend, and the gentleman’s favorite.”
A dog show in Glasgow in 1875 was the first known appearance of the breed under the name Irish Terrier. Four years later, Erin and Killney Boy were bred and produced a large number of champions, securing for themselves the titles “mother” and “father” of the Irish Terrier. The breed quickly rose in popularity and in the 1880s was the fourth most popular breed in England.
Those early Irish Terriers came in several colors, including black and tan, gray, and brindle, but by the end of the 19th century the solid-red color seen today had won out.
The Irish Terrier soon became popular in the United States as well. There was a class for the breed at the Westminster Kennel Club show in 1881, and the American Kennel Club recognized the breed in 1885. The Irish Terrier Club of America was founded in 1896.
The breed proved its usefulness during World War I, serving as a messenger and sentinel. Afterward, he continued to be popular. In 1929, the Irish Terrier ranked 13th among the 79 breeds then recognized by the American Kennel Club. His place has fallen somewhat since then; today he ranks 128th, but those who love him consider him a well-kept secret.
Personality

Like most terriers, the Irish packs a lot of personality into a small body. They are lively dogs who love to play and like to hear themselves bark. They are quick to posture around other dogs and won’t back down if challenged. In the home, they love to be the center of attention, and aren’t above making mischief to receive the attention they crave. Irish Terriers have spunk and sass, and many owners swear their dogs “talk back” to them. They are generally patient with kids, and enjoy playing in the yard with anyone willing to give chase. But at the end of the day, the Irish Terrier will want to curl up on someone’s lap for some affection and relaxation.
Health Problems
The Irish Terrier is one of the healthiest dog breeds. There are no known conditions or problems that are seen consistently within the breed.
Care
The Irish Terrier’s wire coat requires combing about twice a week, in addition to shaping and trimming about four times a year. Show dogs need stripping. For household pets, clipping is enough  it helps in softening the coat but may make the color dull.
An active breed, the Irish Terrier requires daily exercise and entertaining games. Apart from making a good jogging and walking companion, it is also a preferred hunting and hiking partner.
Living Conditions The Irish Terrier will do okay in an apartment if it is sufficiently exercised; a small yard will do. If given sufficient exercise, it is surprisingly well-mannered and dignified indoors.
Trainability
Irish Terriers, like many terrier breeds can be a challenge to train. They have a mind of their own and prefer that they be the ones in charge of the home. Training an Irish Terrier requires absolute consistency – if you bend the rules once for these guys, they’ll walk all over you. Training should be conducted with lots of treats and even more patience. Never treat an Irish Terrier harshly, as they will stop responding to you all together. They are prone to defensive reactions – if an Irish Terrier does not like the way he is being treated, he will snap or bite.
Once leadership is established, however, Irish Terriers can pick up on tricks and can be graduated on to advanced obedience or agility training. These activities are a good way to keep the dog’s mind active, as they require a lot of mental stimulation.
Exercise Requirements
Irish Terriers, although energetic, don’t need tons of exercise. A good, brisk walk each day and a trip to the dog park for rip roaring fun each week will suffice. This breed does enjoy running, so a fenced yard would surely be a plus. When not inside of a secure area, the Irish Terrier should always be kept on a leash.
His playful nature makes the Irish Terrier the perfect family companion. Children love the Irish Terriers desire and ability to catch a ball and bring it back to them. Both the dog and the kids will be tuckered out by the end of the day! This is a definite asset of living with an Irish Terrier.
Grooming 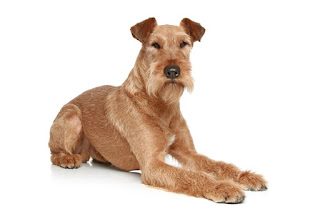 The Irish Terrier doesn’t require a lot of grooming. Weekly brushing with a slicker brush keeps the coat in good condition. Bathe him only if he gets dirty. Trimming isn’t necessary, but many owners have their Irish Terriers groomed professionally three to four times a year for a neat appearance. The coat is trimmed with clippers or by stripping, a process by which coat is thinned and shortened with a stripping knife, a sharp, comb-like tool, or a combination of both. The Irish Terrier Club of America has a helpful guide to grooming the coat.
The rest is basic care. Trim the nails as needed, usually once every week or two. Brush the teeth frequently with a vet-approved pet toothpaste for good overall health and fresh breath. Check the ears weekly for dirt, redness or a bad odor that can indicate an infection. If the ears look dirty, wipe them out with a cotton ball dampened with a gentle, pH-balanced ear cleaner recommended by your veterinarian.
Even though his grooming requirements are minimal, it is important to begin grooming the Irish Terrier when he is very young. An early introduction teaches him to accept grooming without any fuss.
Children And Other Pets It’s said that the little people  gave Irish Terriers to children to be their playmates. Their size and energy level make them great companions for active kids, but as always, they should both be supervised, especially if children are very young. Teach your puppy not to be rough or mouthy, and teach your child not to pull the dog’s tail or ears or hit him. Children should never approach any dog while he’s sleeping or eating or try to take the dog’s food away. No dog should ever be left unsupervised with a child.
Irish Terriers don’t like strange dogs, and they can be aggressive toward other dogs of the same sex. Early socialization with lots of other dogs, strong leadership on your part, and neutering can go a long way toward reducing an Irish Terrier’s dog aggression, but they’re not a guarantee that you’ll turn him into a dog who’s buddy-buddy with other canines.
If you have one Irish Terrier, he can probably learn to get along with one or more cats. Early socialization is key. More than one Irish Terrier may gang up on a cat or cats. Always supervise their interactions and, if necessary, separate them when you’re gone.
Did You Know?
Intrepid and stylish, the Irish Terrier has been nicknamed the d’Artagnan of the show ring for his smooth confidence and winning ways. His other nickname is Daredevil, a nod to his utter contempt for danger.
Appearances in arts and culture
Total
0
Shares
Share 0
Tweet 0
Pin it 0
Share 0