The Skye Terrier is a medium-size dog breed who was developed on the Isle of Skye in Scotland. They were originally developed to hunt and kill badger, otter and fox, but these days they’re appreciated as a versatile companion breed. 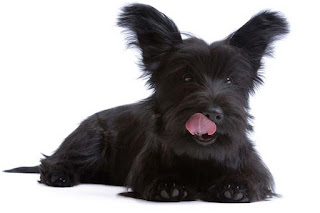 The Skye terrier is a stylish and elegant dog that is, first of all, a working terrier. It is solidly built, with substantial bone, and twice as long as it is tall. The Skye’s short legs enable it to go to ground in pursuit of fox and badger, and the long back imparts flexibility within a confined space. Its strong jaws further aid it in dispatching its prey. Its movement is free and effortless. The hard outer coat and close undercoat afford protection from the teeth of its quarry as well as harsh weather.
The Skye terrier’s soft look belies its tough nature. It is a fearless and a deadly rodent hunter. It is also a mild-mannered house pet, one of the few terriers calm enough to live in the city. It still needs daily exercise in a safe area or on leash, however. It is sensitive yet stubborn. The Skye is affectionate with its family but cautious with strangers. It gets along fairly well with other dogs in the same household but may not mingle well with strange dogs. It is extremely courageous and game and makes a good watchdog. 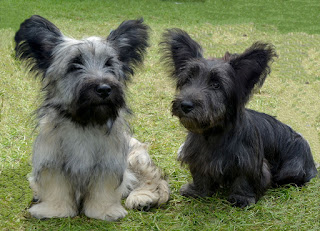 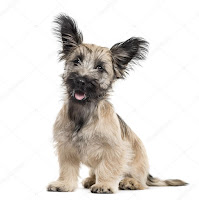 AKC group: Terrier Group
UKC group: Terrier
Average lifespan: 12-14 years
Average size: 35 to 45 pounds
Coat appearance: short, soft, and woolly, covered with an outer coat of straight hair with a hard texture
Coloration: black, blue, dark or light gray, silver platinum, fawn, or cream
Hypoallergenic: No
Best Suited For: Families with older children, singles and seniors, apartments, houses with/without yards
Temperament: Courageous, stubborn, tough, affectionate
Comparable Breeds: Cairn Terrier, Norfolk Terrier
History
Scotland has long been a stronghold of small plucky terriers, and the Skye Terrier is among the oldest of them. They developed along the west coastal area, where they hunted fox and otter.
The purest of these dogs were found on the Isle of Skye, and the dogs were then named Skye Terriers. Skye Terriers were first described in the sixteenth century, when it was already noteworthy for its long coat. Some confusion exists in tracing its history because, for a certain time, several different breeds had the same name “Skye Terrier“. The loyal dog, present under the petticoat of Mary, Queen of Scots at her execution, has been ascribed as a Skye Terrier. In 1840, Queen Victoria made the breed fancy, keeping both drop and prick eared dogs.
This greatly increased its popularity and the Skye Terrier came to America due to this. The AKC recognized the breed in 1887, and it quickly appeared on the show scene. Its popularity has significantly dropped and now it is one of the least known terriers. There is little awareness of its former popularity.
Personality 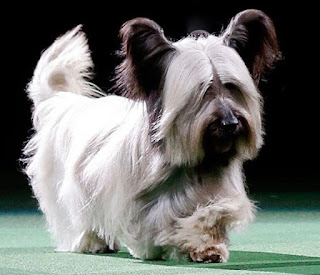 Skye Terriers demand to be the center of attention at all times and will do whatever it requires to maintain that attention, including make mischief around the house. Skyes are laid back when indoors, happy to curl up on the first available lap for an afternoon of rest and relaxation, but they do enjoy getting out and moving several times a day.
They are avid chasers and will bolt after anything that moves – no matter how big or how small – as these little dogs are fearless in the face of danger. They have minds of their own and don’t like to be told what to do, but are affectionate and loyal dogs who adore their immediate family and make good companion animals.
Health
The Skye Terrier is a very healthy breed. The only issue that’s a potential concern is orthopedic problems that could occur during growth. The Skye is achondroplastic, meaning that he has a large body on small legs. If he’s allowed to jump or climb excessively during puppyhood, before the growth plates in his legs have closed, he may limp or develop a condition called premature closure, which occurs when the growth plates don’t close properly. Wait until he’s 18 to 24 months old before taking him on long walks or letting him do any jumping or stair climbing.
Care 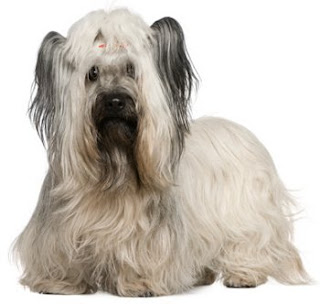 The Skye Terrier is most comfortable living indoors as a house dog. However, it should be allowed outside to play daily. Also, to maintain its peak physical form, a daily short or moderate walk is required. Coat care involves regular combing, and unlike other terriers, a regular bath is necessary and won’t soften the coat much.
Living Conditions
The Skye Terrier is good for apartment life. It is relatively active indoors and will do okay without a yard.
Training
Although a rather bright dog, the Skye Terrier is not the easiest dog in the world to train. All training sessions must be made into fun events. Excited praise and special delicacies should be used consistently during the sessions. Never try to manually place the Skye into the correct position, such as sit or down. This type of method will cause the dog to growl or snap. Gently coaxing is the only training method that works for this breed.
Exercise
The Skye Terrier needs a daily walk. Play will take care of a lot of its exercise needs, however, as with all breeds, play will not fulfill its primal instinct to walk. Dogs that do not get to go on daily walks are more likely to display behavior problems. These dogs will also enjoy a good romp in a safe, open area off lead, such as a large, fenced-in yard.
Grooming 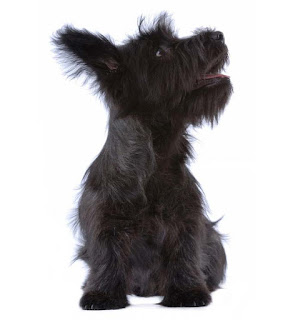 The Skye Terrier coat should be brushed at least once per week with a pin brush. The coat should be misted with water before brushing so that the hair does not break. Baths are required every two to three weeks, depending on the dog’s activity level.
Check the ears on a weekly basis for signs of infection, irritation, or wax build up. Cleanse regularly with a veterinarian-approved cleanser and cotton ball. Brush the teeth at least once per week to prevent tartar buildup and fight gum disease. Additionally, nails should be trimmed once per month if the dog does not wear the toenails down naturally.
Children And Other Pets
A Skye Terrier can make an excellent companion for older children if he’s properly socialized. His terrier temperament may make him too feisty to be a playmate for children younger than six years old, however.
Always teach children how to approach and touch dogs, and always supervise any interactions between dogs and young children to prevent any biting or ear or tail pulling on the part of either party. Teach your child never to approach any dog while he’s sleeping or eating or to try to take the dog’s food away. No dog, no matter how good-natured, should ever be left unsupervised with a child.
The Skye Terrier can be aggressive toward dogs he doesn’t know, but he should get along well with dogs and cats he’s raised with. He’s not recommended for homes with smaller pets since he may view them as a tasty snack.
Did You Know?
One of the best known and best loved Skye Terriers was Greyfriars Bobby, who faithfully watched over the grave of his owner, John Grey, for 14 years after the man’s death. A statue honoring the dog’s loyalty is visited in Edinburgh by dog lovers from around the world.
Total
0
Shares
Share 0
Tweet 0
Pin it 0
Share 0