The Kerry Blue Terrier is the quintessential working dog. He hails from County Kerry, Ireland, where he was bred to hunt small game and birds, kill rodents, and herd sheep and cattle. Intelligent and brave, he became a cherished pet as well, displaying fierce devotion to his family or pack. While not a particularly well-known dog breed, the Kerry Blue enjoys a dedicated following of fanciers, thanks to his working abilities and loyal companionship. 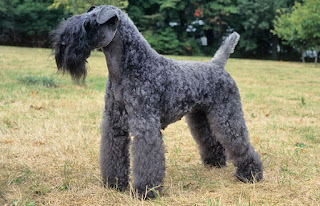 The Kerry Blue Terrier, also known as the Irish Blue Terrier, is a breed of dog.Originally bred to control “vermin” including rats, rabbits, badgers, foxes, otters and hares, over time the Kerry became a general working dog used for a variety of jobs including herding cattle and sheep, and as a guard dog. Today the Kerry has spread around the world as a companion and working dog. Despite a Kerry Blue winning Crufts,the most important UK dog show, in 2000, it remains an “unfashionable” breed, and is distinctly uncommon; however, it not as threatened as some of the other terrier breeds such as Skye Terrier, Sealyham Terrier, and Dandie Dinmont Terrier.

More Quick Facts:
History
The Kerry Blue Terrier was first observed in the mountains of Kerry in Ireland, hence the name of the breed.There is a romantic story of a blue dog swimming ashore from a shipwreck: the coat of this dog was so lovely that it was mated with all the female Wheaten Terriers in Kerry, producing the Kerry Blue. Perhaps this story is not entirely myth, as the Portuguese Water Dog is often suggested as part of the Kerry’s makeup. Others suggest the Kerry was produced by the Soft Coated Wheaten Terrier crossed with the Bedlington

Terrier with or without some Irish Wolfhound or Irish Terrier blood. The extinct Gadhar herding dog is also mentioned as another possible branch of the Kerry’s family tree. One certain fact is the breed became very popular as an all-around farm dog in rural Ireland.

National Dog of Ireland
With the development of dog shows in the late 19th and early 20th centuries, the breed became standardised and “tidied up” for the show ring. The Irish nationalist leader Michael Collins owned a famous Kerry Blue named Convict 224. Collins even made an attempt to have the Kerry blue adopted as the national dog of Ireland. Love of dogs did, however, cross political divides. The first show of the Dublin Irish Blue Terrier club took place outside official curfew hours and was entered both by those fighting for and against an Ireland republic. The Dublin Irish Blue Terrier Club was so successful it led directly to the foundation of the Irish Kennel Club, and a Kerry blue was the first dog that club registered.
Personality
The Kerry Blue Terrier is an energetic and often rambunctious dog who loves to play hard. They are true family dogs who love to be surrounded by the ones they love and insist upon being included in all family activities. They have enough stamina to accompany people on long walks and hikes, but prefer yard games like catch, fetch, or plain old games of tag. Kerry Blues can be trusted around children of all ages, though their yen for rough housing makes them a poor choice for homes with toddlers. They are reliable watchdogs, quick to sound the alarm that someone is approaching, and they are fearless protectors of their property and family. They are not aggressive, however, unless absolutely provoked and are a great choice for families with experience raising dogs.
Health 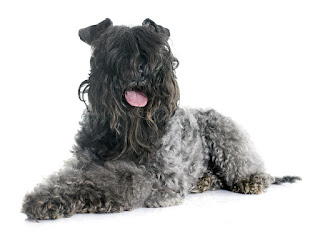 The Kerry Blue Terrier, which has a lifespan of 12 to 15 years, may suffer from clotting factor XI deficiency and retinal folds. It is also prone to minor health problems like cataract, entropion, Keratoconjunctivitis Sicca (KCS), canine hip dysplasia (CHD), spiculosis, otitis externa, and hair follicle tumors, and a major issues such as cerebellar abiotrophy. To identify some of these issues, a veterinarian may run hip and eye exams on the dog.
Care
The Kerry Blue should be able to spend time lots of time with its family, both outdoors and indoors. Exercise is required for the breed, but this can be accomplished with a vigorous game, a leash-led walk, or a nice romp in the backyard.
Coat care consists of combing twice a week and shaping and clipping at least once a month. The Kerry Blue’s ears will also need to be trained during its early stages of development so that its ears will be properly shaped as an adult. 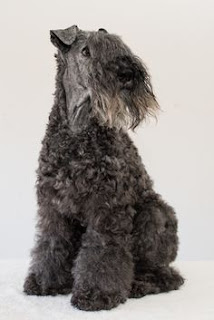 Living Conditions
Kerry Blues are good for apartment life. They are fairly active indoors and a small yard will do.
Training
The Kerry Blue Terrier is intelligent, but being a typical terrier, he’s also quite stubborn. Being such an observant dog, the Blue will watch to see who is in charge and how they can turn any situation to their advantage. If he senses that you’re not in charge at all times, your Kerry Blue Terrier will gladly take charge. Be consistent and confident when training your Blue and never let him get the upper hand. You’ll find that you’ll make much more progress by using positive training techniques. Come to training prepared with plenty of treats and keep these sessions interesting – your Kerry will lose focus if he gets bored.
After he masters basic obedience training, your Kerry Blue Terrier is ready to move onto advanced obedience, agility and earthdog training. Because this is an intelligent breed, you need to keep his mind stimulated, otherwise he’ll engage in destructive behaviors.
Activity Requirements
This mid-sized terrier needs a lot of physical and mental activity in order to maintain happiness and health. They have energy to spare, and just when you think you’ve tired our your Kerry Blue, he’ll come back for more. This breed is not for couch potatoes, and don’t do well in apartments. Houses with open space and a yard to play in are the ideal living situation for a Kerry Blue Terrier. They need about one hour of vigorous exercise every day which can include brisk walks, jogs, or romping in the yard.
In addition to physical activity, it is important to keep the Kerry Blue’s mind active. A bored Kerry is a destructive Kerry. Agility training is a good option to work both his mind and his body.
Grooming 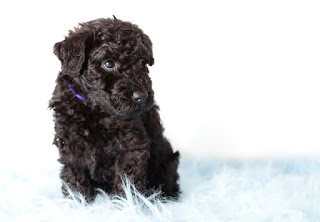 Even though the Kerry Blue sheds very little, or not at all, the coat requires daily brushing to prevent tangles, mats, remove dirt and distribute oils. Trimming and bathing need to occur every four to six weeks. It is recommended that a professional groomer handle the bathing and trimming of a Kerry Blue, but because the breed is not common, it can be difficult to find a groomer who is familiar with the proper Kerry Blue style. Breeders can provide references for groomers.
Check the ears on a regular basis for signs of wax buildup, irritation or infection. Clean the ears with a cotton ball and a veterinarian-approved cleanser; never use a cotton swab in a dog’s ear canal. Teeth should be brushed on a weekly basis to prevent tartar buildup, promote gum health and keep bad breath at bay. Trim nails monthly if the dog does not wear the toenails down naturally outdoors.
Children And Other Pets 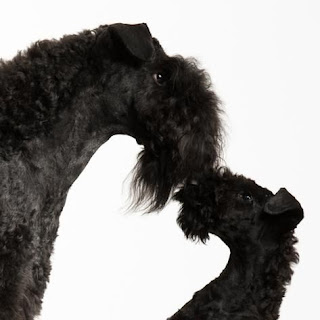 The Kerry Blue loves kids, and because he is a sturdy dog, he can take a few knocks if the play gets rough. He is good-natured, and isn’t normally grouchy with children.
As with every breed, you should always teach children how to approach and touch dogs, and always supervise any interactions between dogs and young children to prevent any biting or ear or tail pulling on the part of either party. Teach your child never to approach any dog while he’s eating or sleeping or to try to take the dog’s food away. No dog, no matter how friendly, should ever be left unsupervised with a child.
He is grouchy, even aggressive, with other dogs, though with socialization and training — and altering — this tendency can be minimized. Never let your guard down, though, when the Kerry Blue is around other dogs, especially those unfamiliar to him.
The Kerry Blue isn’t especially fond of small animals either, given his strong prey drive. His instinct tells him to chase, so keep him leashed in public. The best way to ensure he’ll get along with cats or small mammals in his home is to raise him with them and introduce them properly. Following that, close supervision is advised.
Did You Know?
Kerry Blue Terrier puppies are born black. The coat should reach its mature color by the time the dog is 18 months old.
Total
0
Shares
Share 0
Tweet 0
Pin it 0
Share 0