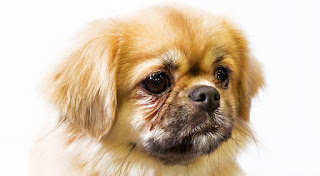 The Tibetan Spaniel, also known as the Tibbie, is a dog breed in the Non-Sporting Group. This little Spaniel is not only an excellent companion, but they are highly valued watch dogs that were once called ‘little lions’ by the Buddhist monks of Tibet. The Tibetan Spaniel was approved by the AKC in 1983.
The average Tibetan Spaniel stands 10 inches high at the shoulders and weighs between 9 and 15 pounds. Their coat requires frequent brushing to help prevent mats and control shedding, and their ears should be cleaned regularly and frequently checked for any signs of infections. 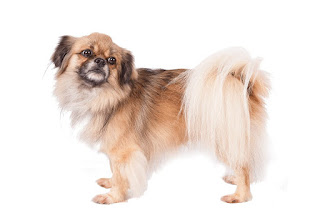 AKC group: Non-sporting
UKC group: Herding
Average lifespan: 14 – 16 years
Average size: 9 – 15 pounds
Coat appearance: Silky
Coloration: Gold, cream, red and sable with white markings on paws
Hypoallergenic: No
Other identifiers: Small body, short to the ground and longer than it is tall; dark brown, oval eyes and black nose; feathering between the toes; plump and fluffy feathered tail
Possible alterations: May be multicolored
Comparable Breeds: Japanese Chin, Pekingese
History
Tibetan Spaniels were bred by Buddhist monks to resemble little lions, which are symbolic of Buddha. Like their cousins the Lhasa Apsos, they served as alarm dogs in Tibetan monasteries. Tibetan Spaniels were highly valued and often presented as gifts to great nobles or rulers. The many exchanges of dogs between Tibet and China mean that the Tibetan Spaniel likely shares a common ancestry with breeds such as the Pekingese, the Japanese Chin, and the Shih Tzu. 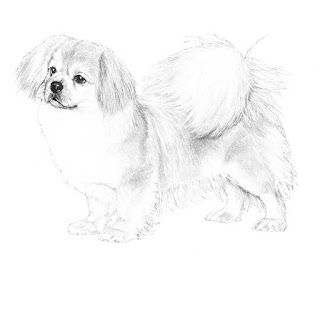 British travelers and missionaries brought some of the dogs to the West in the late 19th century and early 20th century. They include Mrs. McLaren Morris, who brought the first Tibetan Spaniel to England; Sir Edward and Lady Wakefield, who bred several litters; and Colonel and Mrs. Hawkins, who brought a pair of the Wakefields’ dogs to England in 1941. Agnes R. H. Greig, who is also associated with the Tibetan Terrier, sent several to her mother in Britain, but only one from the breeding program survived World War II.
The dogs didn’t get much attention in the United States until the 1960s when a litter was bred from a pair imported from Tibet. Trinity Lutheran Church sexton Leo Kearns is credited with popularizing the dogs after his litter was snatched up by his parishioners in New Haven, Conn. He imported more Tibetan Spaniels from Britain, and others became interested in the dogs. The Tibetan Spaniel Club of America was formed in 1971, and the American Kennel Club recognized the breed in 1984. Tibbies rank 104th among the dogs registered by the AKC.
Personality
Trusting and affectionate toward family members, Tibetan Spaniels may be aloof toward strangers, although never aggressive. True to their heritage, they make excellent watchdogs and will bark to alert you of anything that seems unusual.
Tibbies seem to be especially responsive to their people’s moods and feelings. As loving as they are, however, they’re independent thinkers and won’t always obey, especially if they think they know better or don’t see any good reason to do as you ask.
As with all dogs, Tibetan Spaniels need early socialization — exposure to many different people, sights, sounds, and experiences — when they’re young. Socialization helps ensure that your Tibetan Spaniel puppy grows up to be a well-rounded dog.
Health Problems
The Tibetan Spaniel is a generally healthy breed. However, this dog may suffer from the following conditions: progressive retinal atrophy, cherry eye, patellar luxation, allergies, and portosystemic shunt (a liver condition).
Care 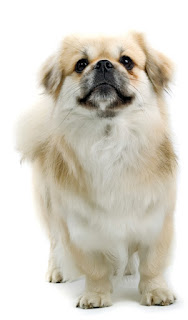 The Tibetan Spaniel breed is meant for apartment life and should not be allowed to live outdoors. The daily exercise needs of the Tibbie are minimal and can be met by indoor and outdoor games or a short on-leash walk. Its coat requires combing and brushing twice weekly.
Living Conditions
The Tibetan Spaniel is good for apartment life. It is relatively inactive indoors and will do okay without a yard.
Training
Because of his stubborn streak, the Tibetan Spaniel can be difficult to train. For the best results, start early and establish yourself as the Alfa of the household. If your dog gets the upper hand, this will be difficult to train them out of. For the best results, use positive training reinforcements, such as praise and treats. And keep training sessions short and interesting to hold your dog’s attention. You’ll be happy to learn that Tibetan Spaniels are pretty easy to house train and it is recommended that you crate train your dog.
Tibetan Spaniels are known to be vocal, alerting you to a stranger’s presence. With patience and consistency, it is possible to train them to stop barking once they’ve alerted you to the possible threat.
Exercise Requirements
Because of his size, Tibetan Spaniels can live pretty much anywhere. They do as well in an apartment as they would in a large estate. They make wonderful companions for seniors as they don’t need a lot of daily exercise. A daily walk and some play time will cover all his exercise needs. If you have a back yard, do not leave your Tibbie unattended. This dog needs to be with you and will be happiest when playing with you.
Grooming Needs 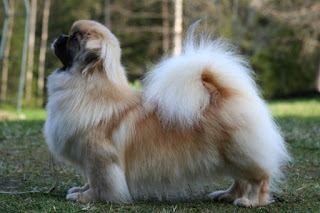 Tibetan Spaniels shed lightly year round, and brushing two to three times per week will keep loose hair under control and keep the coat free from tangles or mats. They typically require a bath every six to eight weeks.
Check the Tibetan Spaniel’s ears on a weekly basis for signs of infection, irritation, or wax build up. Cleanse regularly with a veterinarian-approved cleanser and cotton ball. Brush the teeth at least once per week to prevent tartar buildup and fight gum disease. Additionally, nails should be trimmed once per month if the dog does not wear the toenails down naturally.
Children And Other Pets
Tibetan Spaniels are affectionate and protective of children, but because they’re small, they can be injured easily by rough handling, so they’re best suited to homes with children who are at least 6 years old and know to be gentle and not to tease. 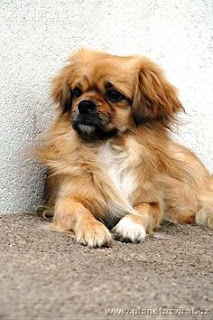 As with any dog, always teach children how to approach and touch your Tibetan Spaniel, and supervise any interactions between dogs and young children to prevent any biting or ear pulling from either party.
Tibetan Spaniels usually get along well with other dogs and cats. Most enjoy having another dog as a companion.
Is this breed right for you?
A human lover to the bone, the Tibetan Spaniel goes well with young children and other pets. A great family dog, the breed also makes for an excellent watchdog. Suited for apartment life, he is a true-blue inside dog. Enjoying a daily walk and time out in the yard, he is a bit difficult to train. Requiring moderate grooming, the Tibetan Spaniel is a moderate shedder, but does lose a large amount once a year. In need of a master with good leadership skills, the breed is likely to show behavioral problems if allowed to develop small dog syndrome.
Did You Know?
The Tibbie is not a true Spaniel. He was referred to as an “epagneul,” a French word used in the Middle Ages to refer to small comforter dogs.
A dream day in the life of a Tibetan Spaniel
The Tibetan Spaniel is likely to wake up with a smile. Happily wagging his tail at his owner, he will gladly follow his master wherever she may go. Running outside for a romp in the yard, he’ll bark at any possible intruders. A lover, he’ll play with and lick the children at any available opportunity. Kindhearted, he’ll be at your feet until the end of the day, where he’ll cuddle close for bedtime. 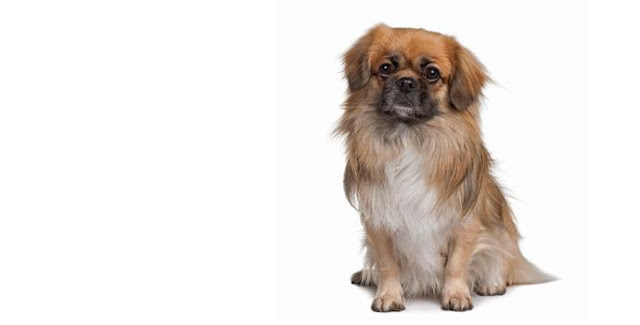 Everything about your English Toy Spaniel