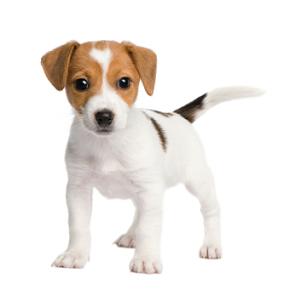 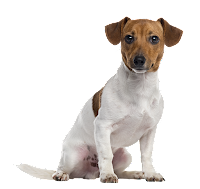 AKC group: Small Terriers
UKC group: Terrier
Average lifespan: 10 to 15 years
Average size: 13 to 17 pounds
Coat appearance: Dense, Harsh and Rough, Short-Haired, Thick, and Wire
Coloration: white, white with black or tan markings, or tricolor (white, black, and tan)
Hypoallergenic: No
Best Suited For: Families with older children, active singles, experienced owners, houses with/without yards
Temperament: Energetic, independent, intelligent, stubborn
Comparable Breeds: Cairn Terrier, Parson Russell Terrier
History
The Jack Russell Terrier was developed in southern England during the mid-1800s by Parson John Russell, from whom the breed took its name. Russell aimed to create a working terrier who would hunt with hounds, bolting foxes from their dens so the hounds could chase them.
The Jack Russell became a favorite of many sportsmen, especially those who hunted on horseback. The breed was known in the U.S. by the 1930s, and several breed clubs sprang up with different opinions concerning the Jack’s appearance, working ability, and whether he should compete in conformation shows or remain a working dog.
The Jack Russell Terrier Club of America maintains an independent registry and considers the Jack purely a hunting dog, but the Jack Russell Terrier Association of America (JRTCA) sought recognition by the American Kennel Club, which was granted in 2000. To differentiate it from the dogs registered by the JRTCA, the American Kennel Club renamed the breed, calling it the Parson Russell Terrier.

Differences with related breeds
The Jack Russell terrier and Parson Russell terrier breeds are similar, sharing a common origin, but have several marked differences — the most notable being the range of acceptable heights. 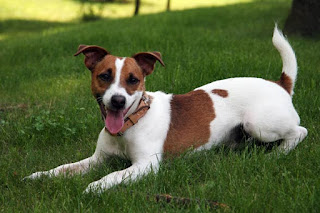 The energetic and spirited Jack packs a lot of personality into his small body. Loving, devoted, and endlessly amusing, he enjoys life and all it has to offer. Given half a chance, he’ll pursue his delights over fences and through the streets. He’s incredibly intelligent, but his wilful nature can make him difficult to train. Friendly toward people, he can be aggressive toward other dogs and any animal that resembles prey, including cats. His fearless nature puts him at risk when he decides to take on a bigger dog.
He thrives on structure and routine, but training sessions should be short and sweet to hold his interest. Repetition bores him. A proper Jack is friendly and affectionate, never shy.
Like every dog, Jack Russells need early socialization — exposure to many different people, sights, sounds, and experiences — when they’re young. Socialization helps ensure that your Jack Russell puppy grows up to be a well-rounded dog.

Health
Common health issues affecting the Jack Russell breed include inherited eye diseases and deafness. Legg Perthes is a disease of the hip joints that can occur most commonly in smaller breed dogs, the Jack Rusell included. They are also prone to dislocation of the knee caps.
Jack Russells are well known for living long and healthy lives, as breeders have protected the gene pool, preventing direct in-line breeding. Given proper care, life expectancy averages about 15 years, possibly even longer. The common health issues associated with   Jack Russells are generally due to recessive genes of certain lines being bred. 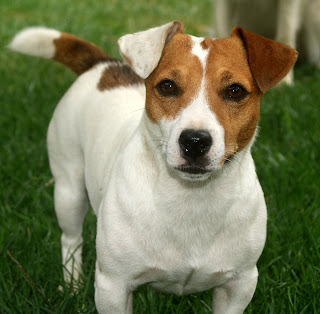 The biggest care concern with Jack Russells is making sure they get enough exercise. Outside of that, caring for them is relatively simple. Jack Russells only need to be bathed when necessary due to their short coat. Regular combing and brushing is recommended with a firm bristle brush.
To get a Jack Russell Terrier show-worthy, its coat must be stripped rather than clipped. This creates a shorter and smoother coat that is water and bramble resistant, unlike clipped coats.

Living Conditions
The Jack Russell Terrier will do okay in an apartment if it is sufficiently exercised. It is very active indoors and will do best with at least an average-sized yard.

Trainability
Jack Russells are highly trainable dogs and soak up new tasks like a sponge. They are terriers and can exhibit stubbornness if they don’t like the attitude of the person training them. Positive reinforcement and mixing up the daily training routine will keep your Jack Russell engaged and interested. Discipline and harsh tones will cause this dog to become defensive which may lead to snapping or biting.
Once basic obedience is mastered, Jack Russells should move on to advanced obedience, trick training and agility work. They thrive on new activity and will be at the top of their class in just about every activity they participate in.

Exercise Requirements
Jack Russell Terriers need lots of room to move around, so they aren’t the best choice for apartments. If stuck in a small living area, it may lead to destructive behavior such as chewing. A fenced-in yard is best for this breed, but he should always be supervised, as he will take off after small animals and dig up a storm.
Take your Jack Russell out for a daily walk and let him run around in the yard. If you want to tire him out, a hearty game of catch will always set tails wagging. This breed loves balls and will gladly bring it back to you until your arm tires out.
Just as important as physical activity is mental stimulation. The Jack Russell Terrier is an intelligent dog and will excel in agility activities including sprinting, flyball competitions, obstacle courses and retrieving. This covers your Jack Russell for both physical and mental stimulation requirements. 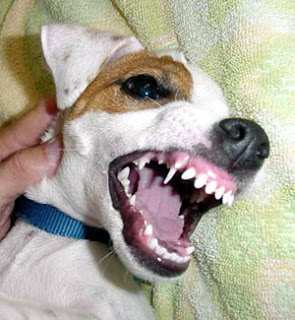 Need only weekly brushing to remove dead and loose hair. If you brush your Jack faithfully, he should rarely need a bath.
Trim nails once or twice a month. If you can hear them clicking on the floor, they’re too long. Short, neatly trimmed nails keep the feet in good condition and protect your shins from getting scratched when your Jack enthusiastically jumps up to greet you.
The only other grooming care he needs is dental hygiene. Brush his teeth at least two or three times a week to prevent tartar buildup and periodontal disease, daily for best results.
Start brushing and examining your Jack when he’s a puppy, to get him used to it. Handle his paws frequently — dogs are touchy about their feet — and look inside his mouth and ears.   Make grooming a positive experience filled with praise and rewards, and you’ll lay the groundwork for easy veterinary exams and other handling when he’s an adult.

Children And Other Pets
Jack Russell Terriers are loving and affectionate dogs who can do well in homes with older children who understand how to interact with dogs. They’re not suitable for homes with young children. Besides being rambunctious, they can snap when roughly handled.
Always teach children how to approach and touch dogs, and supervise any interactions between dogs and young children to prevent any biting or ear or tail pulling on the part of either party. Teach your child never to approach any dog while he’s sleeping or eating or to try to take the dog’s food away.
Some Jacks are aggressive toward other dogs, especially dogs of the same sex. They have a strong prey drive and will chase  cats and other small animals.

Is the Jack Russell Terrier the Right Breed for you?

Low Maintenance: Infrequent grooming is required to maintain upkeep. Little to no trimming or stripping needed.
Constant Shedding: Routine brushing will help. Be prepared to vacuum often!
Difficult Training: The Jack Russell Terrier isn’t deal for a first time dog owner. Patience and perseverance are required to adequately train it.
Very Active: It will need daily exercise to maintain its shape. Committed and active owners will enjoy performing fitness activities with this breed.
Not Good for New Owners: This breed is best for those who have previous experience with dog ownership.
Good with Kids: This is a suitable breed for kids and is known to be playful, energetic, and affectionate around them.